Heraldry In The Movies

To be truthful, in a movie that's going to be released almost a year from now, on November 18, 2016.

The movie, a Harry Potter prequel, set in New York, entitled Fantastic Beasts and Where to Find Them, that has just released its first "teaser trailer" to the public.

Surprisingly enough, there was a shot of some heraldry in one of the scenes: a version of the arms of the United States of America.

Not as surprisingly, the depiction was not the coat of arms of the U.S. (Well, technically speaking, I suppose, what we are seeing here is the emblem of the "Magical Congress of the United States of America." So, not really the arms of the US, just something that tries to be.) 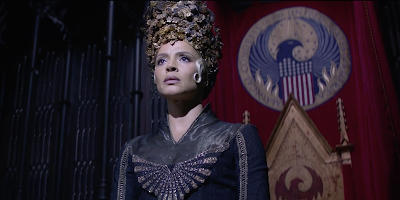 The US arms are probably best blazoned as Paly of thirteen argent and gules a chief azure.  The above image shows those arms but with the red and white stripes switched, and the chief is just crammed full of white stars (heraldic mullets argent).

So close, and yet so far.

It will be interesting to see if there is any other heraldry used in the movie.  I'll be sure to let you know if I run across any.

And if you want to see the trailer for this new movie yourself, you can find it on-line at: http://www.techinsider.io/fantastic-beasts-trailer-2015-12