One of the my "guilty pleasures" in looking at/for coats of arms is the occasional find of another coat of attributed arms; a coat of arms designed and representing an individual, real or mythological, who lived some time before the introduction of heraldry in the 12th Century.

There are the ones you find in any number of old books, of course: King Arthur and the rest of the Nine Worthies; the three magi (below, from the Wernigeroder Wappenbuch); Jesus; and even Satan.

I even have a subfolder on my computer labeled "Attributed Arms" in which I place images of such arms that I run across, just so I can go back to them periodically without having to hunt them down in all the armorials, etc. from which I originally found them.

I was going back through another old source on-line which wasn't even primarily about heraldry; the Speculum humanae salvationis, Hs-2505, an old manuscript of illustrated stories from the Bible that I ran across on the website of the Darmstadt University Library.

While not specifically heraldic, a number of the illustrations included coats of arms to identify some of the figures they contained. The one that most attracted my attention was this one: 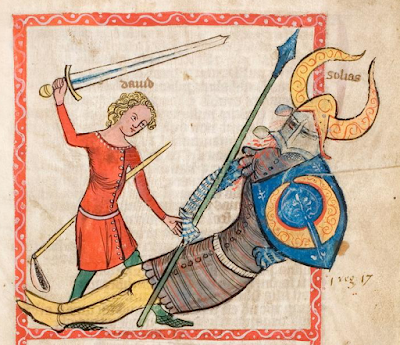 From the story of David and Goliath, we have the arms of the giant Goliath of Gath.

It came as a complete surprise to me; I'd not seen attributed arms for Goliath before.  And what a great, and simple, coat of arms it is, too! Very much Germanic in style, with the crest on the helmet matching the charges on the shield. Goliath of Gath! Who knew?

If you are interested in seeing this old manuscript, you can find it on the website of the Darmstadt University Library at http://tudigit.ulb.tu-darmstadt.de/show/Hs-2505?sid=4e2a9d709bd960c47873f761448f19f8

Take a look and see what other rare attributed arms you can find!