In a recent article at the Boston Globe entitled “Harvard Law will scrutinize use of slaveholders' seal,” journalist Steve Annear covers the controversy which has arisen over the inclusion of a colonial coat of arms in the logo/coat of arms used by the Harvard University School of Law. 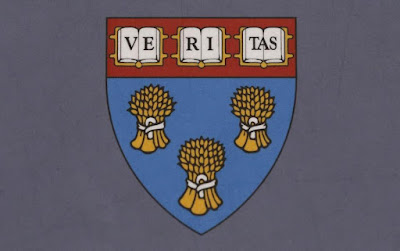 The arms of the Law School could be blazoned Azure three garbs or, a chief of Harvard (Gules on three open books argent garnished or the word VE-RI-TAS [Latin: Truth] sable).

This controversy arises in the wake of the decisions in some of our southern states to remove the Confederate battle flag from certain public venues because of its adoption and use by those opposing equal rights for blacks in this country in the 1960s and since.

The main portion of the shield - Azure three garbs or - are the arms of Isaac Royall, as found on a baptismal basin donated by him to St. Michael’s Church in Bristol, Rhode Island; on his bookplate; on a two-handled cup in the possession of the First [Congregational] Church of Medford, Massachusett; and on the tomb of Isaac Royall and his father, William Royall, in Dorchester, Massachusetts (Bolton’s American Armory, Charles Knowles Bolton, The F.W. Faxon Company, Boston, 1927, pp. 142-143). (Bolton’s work, which heraldic scholars have noted has many errors in it, is the only work in which I have found these arms.)

Isaac Royall left in his will land for Harvard College to sell and establish the first law professorship in his name. However, he was a slaveowner, and further, “Royall's father ‘treated his slaves with extreme cruelty, including burning 77 people to death,’ according to a statement from the law school.” Hence the controversy, and following a call from students, Martha Minow, dean of the law school, formed a special committee to study, discuss, and make recommendations about the use of the arms to represent the school.

You can learn more about this controversy (on the one hand, it would disassociate the school from the history of slavery in this country; on the other hand, would it be sanitizing the past rather than confronting it?) on the website of the Boston Globe at http://www.bostonglobe.com/metro/2015/12/01/harvard-law-school-forms-committee-examine-use-crest-tied-slave-ownership/1JR7OwiLIsPc3BxRUiH6yH/story.html?event=event25