I like to see when people use heraldry in some way, no matter what the context is.  Really, I do.

It's just that, far too often, what they use is sometimes, at best, only something that's almost like heraldry, but really isn't quite heraldry.

In this case, a newly-carved figurehead has been added to the replica caravel Matthew of Bristol, built in 1997 to mark the 500th anniversary of John Cabot's voyage of discovery to Newfoundlan.  The addition of the new figurehead is to commemorate the anniversary of that first voyage.

However, despite being designed by, as the article notes, "an expert on heraldry," and said to be inspired by the arms of King Henry VII, the result is not quite heraldry. 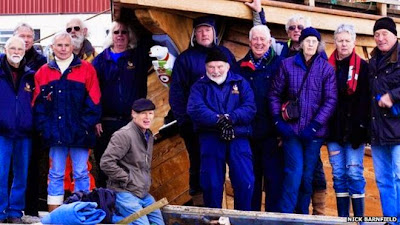 As you can see (well, sort of, but this is the best photograph I've found of it) here, the shield is being supported by the white greyhound of Richmond, and the shield itself consists of a field divided per pale of white and green (the colors found in the Welsh flag) with a red dragon and a Tudor rose.  So I guess to be more accurate, the design is not so much inspired by the arms of Henry VII (Quarterly France and England) as it is by some of the external ornaments of his coat of arms: the supporters and a badge.  Here is the achievement of arms of Henry VII (from Wikimedia), with its supporters and (strewn on the compartment on which the supporters stand) the badge of a Tudor rose: 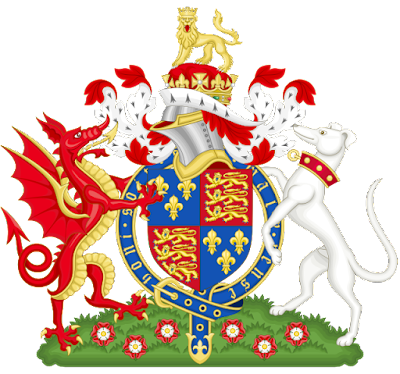 All in all, I think the figurehead says less "Henry VII" that it does "Wales," but still, it's an attempt at heraldry, and as I said, I like to see when people use heraldry in some way even if, in my opinion, it comes up a little short of the goal.

You can find the May 1, 2015 story of this new figurehead on the website of The Bristol Post at http://www.bristolpost.co.uk/Matthew-unveils-new-figurehead-mark-anniversary/story-26430448-detail/story.html and from BBC News at http://www.bbc.com/news/uk-england-bristol-32553359