I respect heraldry; really, I do.  Unfortunately, that respect is not always shown by others.

In a somewhat cringe-worthy example of this (found in the Facebook group "Heraldry Hall of Shame"; not a group for the weak of heart.  You have been warned!), I ran across the following the other day: 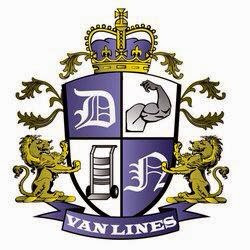 It's the logo (I really cannot call this a coat of arms) of DN Van Lines of New England and Florida, based in Marlborough, Massachusetts, west of Boston (and just a short drive up I-495 from where my parents grew up in Milford, Hopkinton, and Upton).

So what all do I find that is just so "wrong" about this logo?  Besides the quartering, I mean.  Here, let me count the ways.

They are not a "Royal" anything, so the imperial crown sitting atop the shield is entirely out of place.

They clearly don't understand what mantling is, or what it was used for, since there a just a few bits of mantling issuing from the crown and from the sides of the shield.

The "supporters" (each a lion sejant erect) are clearly crests, given that each one is sitting atop a torse or wreath.

The "motto scroll" does not contain a motto, only the "Van Lines" portion of the company name.

I will just say that it's too bad that they couldn't find someone (anyone!) in the area who knew something of heraldry and could help them design a decent heraldic logo for their company.  Really.