Tracking Down a Coat of Arms ...

A recent correspondent enlisted my aid in trying to track down the origin of a coat of arms in an old family history book, The Crum Family in America, following a line of the family descended from a pair of brothers who emigrated from what is now Germany to Virginia in 1741.

The book illustrated the following coat of arms as belonging to the family. 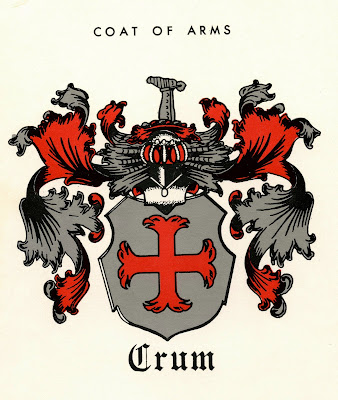 My correspondent noted some unusual features in the arms, and asked my assistance in understanding the arms and trying to determine their origin.  The features which struck him as unusual were the arms of the cross ending in eagle's heads, which he had not seen anywhere else; the fact that the helm was facing forward rather than to dexter or sinister; and the armored boot as the crest.

After doing some research in some of the general and German armorials here, I responded as follows:


The cross terminating in eagle's heads is something that I've not found, either, though it is reminiscent of a "cross gringoly," a cross with each arm ending in two serpent's heads.  But even the cross gringoly is found but rarely; this variant is thus even more rare.
The barred helm being face on is actually not all that rare in German heraldry, though even there facing slightly to dexter or to sinister is more common.  Still, in my copy of Siebmacher's Wappenbuch von 1605, on the pages where each row of arms contains five shields, the helm atop the center shield in each row faces forward, while the two on the left and two on the right face in toward the center.  So it's not entirely unexpected in German heraldry to have a single shield with the helm facing forward.
The crest is unusual, in that for a boot (even an armored boot) you would normally expect it to be right side up, or "sole down".  I have seen crests of entire legs (armored and unarmored) which are upside-down (or "foot up"), but for a boot or a lower leg only, this position is very unusual.
With all that as introduction, what I suspect happened is that the author of the book found some what we call "bucket shop heraldist," someone who looks up someone's "family coat of arms" (or worse, "family crest") in their database and just spits one out, whether or not their customer is related to the original bearer of the arms or not and, if not finding an exact match in the database, grabs one from a similar surname - sometimes with modifications, sometimes without - and offers that up as the "family coat of arms" of X family.
This is not a new phenomenon; I have seen where one such heraldist in early 18th Century Boston gave his customer, surnamed Scolly, the arms of a family named Scholar.
What I think happened here is that, not finding a coat of arms for Crum, someone modified the arms and crest of a family named Crümmel de Roiff of Westphalia (listed in Rietstap's Armorial Général), whose arms are blazoned Argent a cross gringoly gules, and whose crest is A boot gules, spurred argent.  [Below is a .jpg of Crümmel de Roiff's arms taken from Rolland and Rolland's Illustrations to the Armorial Général.]  They then changed the serpent's heads to eagle's heads on the cross (or they didn't know that they were supposed to be serpent's heads, and drew them as eagle's heads), and (probably lacking an illustration) placed the boot upside down for the crest.  Presto!  The arms of Crum from Germany.  Happy customer; paid heraldist.  Win-win for everyone.  Except, of course, for those who come later and are trying to figure out where the arms came from. 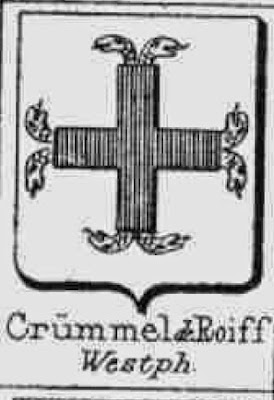 So, what do you think?  Did I miss a Crum coat of arms with a cross terminating in eagle's heads, or are we dealing with another example of the bucket shop herald's work?

I know what I think.