A Bit of Historical Armorial Silver


I receive the occasional email from the kind folks over at myfamilysilver.com when they have a piece that they think I might be interested in (unaware, apparently, that as a general rule their prices are a bit too rich for my budget, however, much I might like to stretch my monies to be able to buy one or another of these great finds).

In this case, they sent me a note about a George IV silver soup plate from the service of Robert Peel.  You know, the Robert Peel, second baronet, who was English Prime Minister 1834-1835 and again from 1841-1846.

The service precedes his time a Prime Minister, being dated to 1829, but it does have a very nice rendition of his coat of arms on it. 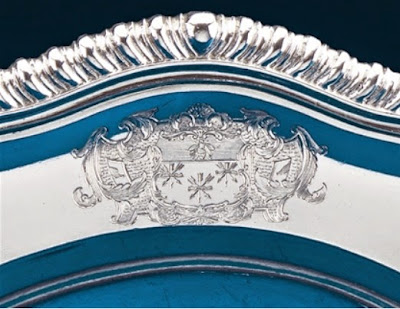 Burke's General Armory blazons the arms of Peel, "descended from William Peel, Esq., of Oswaldwistle, co. Lancaster, grandfather of the first Sir Robert Peel, Bart." as Argent three sheaves of as many arrows proper banded gules on a chief azure a bee volant or. The crest is given in Burke as A demi-lion rampant argent gorged with a collar azure charged with three bezants, holding between the paws a shuttle or, and the motto is Industria.

You can learn more about this fine silver soup plate, including such things as its weight and dimensions, along with a rendition of the Peel crest, as well as its asking sale price (again, a little much for my budget, but it might fit well into yours!) over on the website of myfamilysilver.com at http://www.myfamilysilver.com/mp/item/21624/a-george-iv-silver-soup-plate-from-the-robert-peel-service