Something To Be Thankful For


Today is Thanksgiving Day in the United States, and I thought I would share a new find that I am thankful for on this day.

To be truthful, while I'm thankful for this particular find, I'm even more thankful to the
Bavarian State Library, which has been for several years now digitizing and uploading 16th and 17th Century heraldic books to make them available to people like me who likely would never even know they existed except for their being uploaded on-line.  So, a hearty Thank You! to the fine folks at the Bavarian State Library.

Which is a whole lot of stuff, including a page of heralds in their tabards. 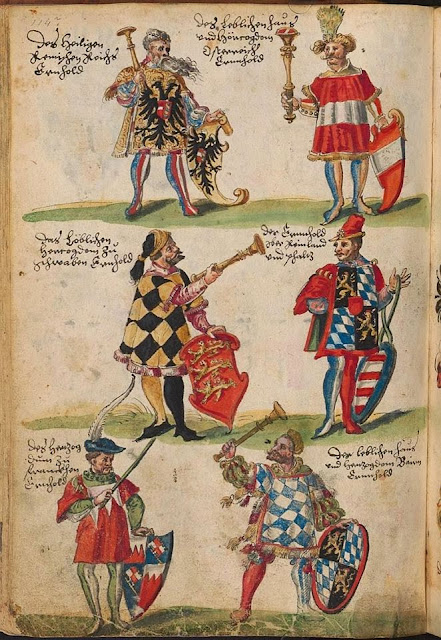 Isn't that cool!  (Although the Bavarian herald in the lower right looks like he's about to use his trumpet or baton as a mace!)

Anyway, the entire book can be found, perused, paged through, and even downloaded as a .pdf to your hard drive, at http://bildsuche.digitale-sammlungen.de/index.html?c=viewer&l=en&bandnummer=bsb00016900&pimage=00001&v&nav

Enjoy!  And thank you Bayerische StaatsBibliothek!
Posted by David B. Appleton at 6:00 AM