So, after making my way through the naval museum at Nauticus in Norfolk, Virginia, guess what I went to see next? 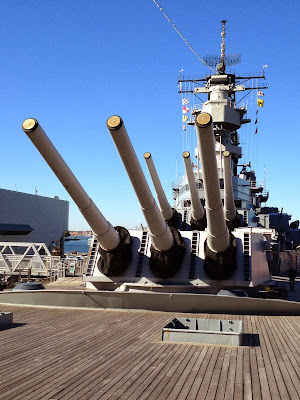 This is BB-64, the USS Wisconsin, an Iowa-class battleship, now decommissioned and acting as a living museum.

And you'll never guess (well, unless you are familiar with this blog) what I found there.  That's right, heraldry!  This was a painted coat of arms of the Wisconsin. 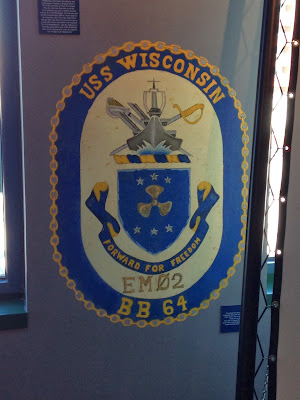 And here's a more "official" version that I found on-line of the same, well, not same, exactly, but similar, coat of arms.  I mean, the stars on the shield, the crest, and the motto are the same, as are the designators USS Wisconsin and BB64.  But really, did no one notice the difference between a propeller and a ship's wheel surmounted by the arms of the United States?  It seems to me that it would have been fairly obvious.  But what do I know? 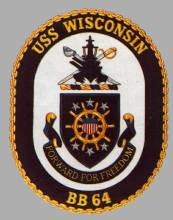 And up on the side of the battleship was this bit of heraldry, for the Destroyer Cruiser Flotilla Eight. 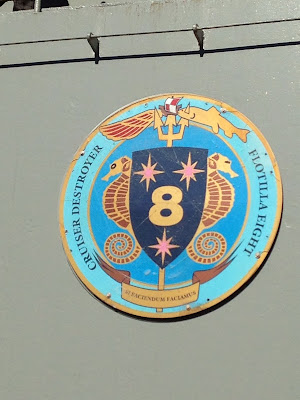 And here's a patch with those arms (again, found on-line). 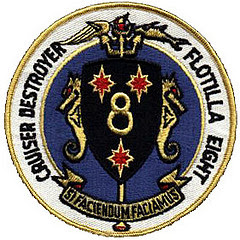 Either way, it's heraldry, which, as I have said so often, you can find everywhere!  In this case, sitting at a dock in Norfolk, Virginia.