I had been asked once again to speak to the Virginia Beach Genealogy Society (this was my third time out there; they must really like me!) and found that, once again, you can find heraldry wherever you go.

In this specific instance, since I had all day before the presentation to "play tourist" and see the sight, I was visiting the Nauticus Maritime Museum in Norfolk.  It's a really great place to visit; they've got a lot to see (including BB64, the USS Wisconsin battleship, but more about that in another post), with a great series of exhibits that covers basically the history of the United States Navy from its founding until today.  Among a whole lot of other things, they've got a piece of the armor plating of the USS Monitor (on loan from the Mariner's Museum in Newport News), as well as a cannonball and the ship's bell from the Monitor's famous opponent, the CSS Virginia (an ironclad ship built on the hull of the former USS Merrimac).

But when I came to the section of the Museum dedicated to the Great White Fleet sent by President Theodore Roosevelt on a circumnavigation of the globe from December 1907 to February 1909, I ran across the following bit of heraldry:

It is, of course, the arms of the United States done in a really nice carving that decorated the prow of one of those pre-WWI warships.  You can see how it would have been mounted  on the ship based on the model below. 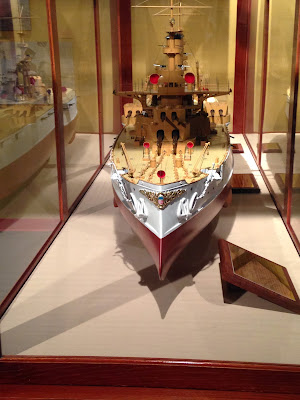 What a wonderful piece of heraldic carving, from the shield of the arms to the very fierce-looking eagle above to the scroll with the word "Excelcior" below, to the leafy foliage on each side as well as the human figures supporting the cartouche on which the arms are placed.

There is, as many of you will no doubt see for yourselves, an error in the arms, though.  Instead of being Paly [or for the purists out there, paleways] of thirteen Argent and Gules a chief Azure, the colors of the vertical stripes have been switched, making them Gules and Argent.  An easy enough mistake to make, I suppose, except perhaps for "us heralds."  I've certainly seen it often enough in renditions in various media of the national coat of arms.  At least they didn't put any stars on the chief, which is a even more common error, conflating as it does the national arms with the national flag.

But what a great piece of naval history, and heraldic art, to find while playing tourist!