Is There a Coat of Arms in Your Family?


One of the things that I get to do on a fairly regular basis that I really enjoy is to talk to others (mostly genealogists, but also folks from various lineage and patriotic societies) about my little hobby: Heraldry.

And almost inevitably, I'll get asked if I have a coat of arms in my own family.  I used to be able to remark that it was very disappointing, that none of my ancestors seemed to take note of the hobby of one of their descendants, and that no, for all the research that I'd done, I had not yet (and I always stressed that "yet") found a coat of arms used by any of my progenitors.

Well, then we went and spent a week in Massachusetts, looking at ancestral gravesites and historical sites and all that, and wouldn't you know, I found something that meant I could no longer use that story about no use of armory in my family.  It came about when I was visiting the table tomb of my 13th-great grandparents, John and Mary (Chilton) Winslow, in King's Chapel Burying Ground in Boston. 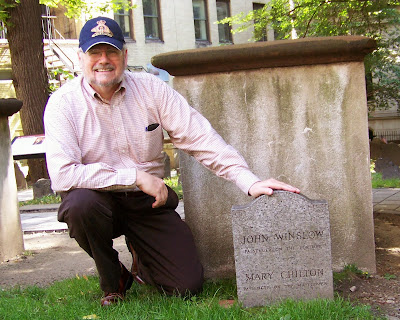 Which was all well and good, and it was a pleasure to be able to visit their memorial (and to buy an armorial tee shirt, bearing the arms of the Hanoverian kings of Great Britain, sold at the Chapel!), when around on one side of the table tomb (the side off to my left), this plaque: 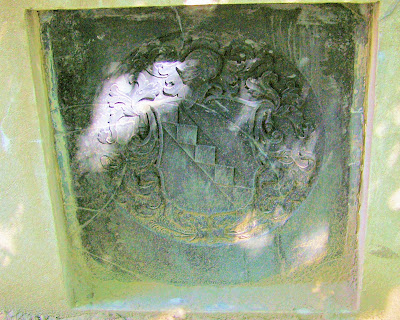 These arms also appear in the Gore roll of arms (about which I have written before) as number 91, Joshua Winslow, a descendant of John's brother Edward. 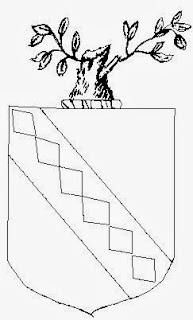 Do I know if John Winslow used this coat of arms?  No, not for sure, I don't.  But his brother, Edward, the Governor of Plymouth Colony, did (most notably on the seal of his will in 1654), and as his younger brother, John would also have had the right to do so whether he did or didn't actually use them during his lifetime.

So I've had to change up my patter a little bit, and explain that while you may or may not immediately find a coat of arms used in your family, you should keep looking, because you just never know when you might run across one!