On the Road Again


We recently took a little trip to Fort Wayne, Indiana followed by a drive up to the little town of Charlotte, Michigan, where my family lived fifty years ago.  We were attending the Federation of Genealogy Societies annual conference in Fort Wayne, and then went to Charlotte to do some family history research.  (My father used to write a column in the local weekly newspaper, but he didn't keep copies of them.  Admittedly, his columns were written on a manual typewriter, and carbon paper would have been the only option to do so.  I learned a while back that the local library kept bound copies of the paper and would allow me access to them as well as permit me to photograph and/or scan them.  Having done that now, I've got a huge digitization project facing me.)

Anyway, this trip was a great opportunity to once again confirm my long-standing belief that you can find heraldry everywhere, even in towns the size of Charlotte, which in the most recent census had just barely over 9,000 people.  ("Salute!")*

Admittedly, not all of the heraldry we found was real coats of arms.  But still, even the faux heraldry serves to illustrate that the use of coat armor is alive and well.

So let me share what I ran across in our travels, good, bad, and indifferent.

First up is the first piece of faux heraldry I saw, directly across the street from the Fort Wayne convention center, on the facade of the Embassy Hotel. 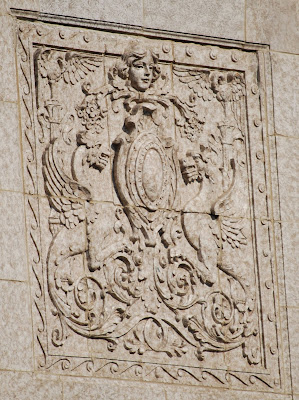 As you can see, the "shield" is blank, but it is otherwise organized very much like a complete achievement of arms, with a human face taking the place of helm and crest and a foliate design with flowers serving as mantling.  The shield is being supported by two bird-winged wyverns resting atop a "gas bracket" compartment.  There are also two pelicans atop a pair of columns vulning themselves in the upper corners of the rectangle containing the achievement.

It's a wonderful bit of carving (several identical panels ran across two sides of the hotel) and architectural decoration, but I find it a real shame that the shields are blank when it would have been so easy to carve a real coat of arms there.


* For my foreign readers, that's a line from the old TV show "Hee Haw," which would name some usually small town in America, give its population size, and then everyone in the cornfield would salute while saying "Salute!"