A Last Bit of Faux Heraldry in Fort Wayne


Finally, we ran across this sign (my fault, I'd made a wrong turn driving back to our hotel from the conference; a happy, I supposed, mistake) that is certainly trying to be heraldic. 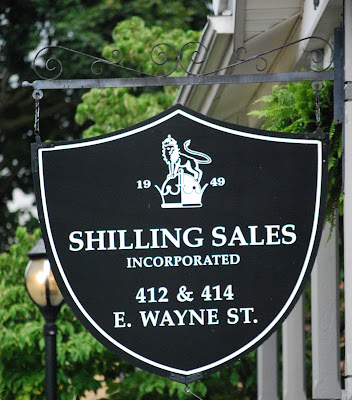 It isn't, exactly, though.  While it is certainly placed on a shield shape, the most heraldic part of it is a variation of the Royal crest of Great Britain (and Canada, for that matter, and New Zealand, and so on) (atop an arched crown a lion passant guardant wearing an arched crown), placed in the chief part of the shield instead of atop or above the shield (in the usual place for a crest).  The fact that the arched crown and lion appear to be divided per pale is certainly a difference from the Royal crest, but the overall impression of the Royal crest is hard to avoid, and that impression may very well be exactly what they were trying to mimic.

Is there even more heraldry and heraldry-like items that I may have missed in Fort Wayne?  I fully expect it, but the fact is that I was there attending a conference and didn't have a lot of time to cruise the streets looking for coats of arms, real and otherwise.  Still, I think the last several posts here adequately demonstrate once more my belief that "you can find heraldry everywhere!"