The big achievements of "arms" with the blank oval shields on them that I discussed in my last post were not the only "heraldry" to be found on the facade of the Embassy Hotel in Fort Wayne.  Also to be found were several shields identical to this one. 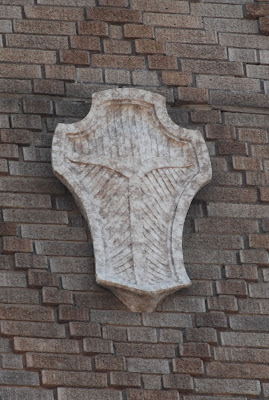 While not a blank shield, I do not believe this to be real heraldry either.  Were the markings on the field hatching, the blazon would be something like Per pall gules, purpure, and vert, a pall [with the upper arms oddly bowed] argent.  I do not recall ever seeing a real coat of arms with a design like this.  Still, at least it's not a blank shield (of any shape).  (The pattern done in the brickwork is visually interesting, too.)