Next door to the Cathedral of the Immaculate Conception in downtown Fort Wayne, Indiana, is the MacDougal Memorial Chapel.  It's a large round building, that in a way rather reminded me of the baptistery near the Duomo in Florence, Italy. 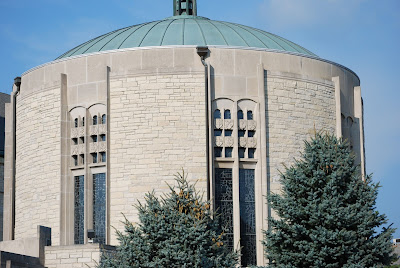 However, other than that initial impression, the two buildings are entirely different in style and decoration.  And the decoration here that caught my eye were the armorial panels over the windows.  There were two sets of eight shields, which were repeated as they went around the building.  Here are close ups of the two sets. 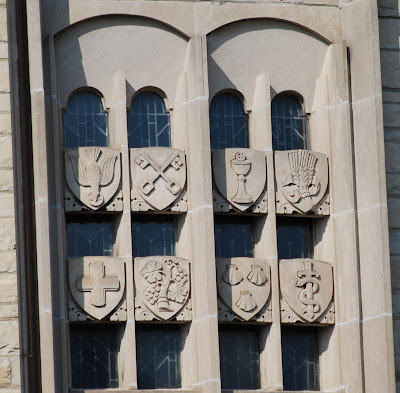 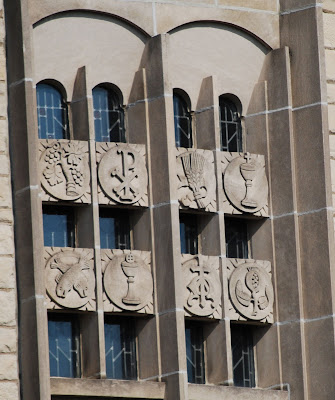 The first panel is done on heater shield shapes; the second on roundels.

The top row in the first panel is, from left to right, the Holy Spirit descending the form of a dove, the crossed keys of St. Peter, the chalice and host of Communion, and three stalks of wheat bound by a ribbon.  The second row is a cross couped (sometimes called a Greek cross), a grapevine fructed, three escallops (the escallop shell being a symbol of pilgrimage, particularly in reference to a pilgrimage to the shrine of St. James at Compostela, Spain), and a sword inverted entwined by a snake.

The top row in the second is another grapevine fructed, the Chi Rho, three stalks of wheat bound by a ribbon, and a chalice with a cross issuant from its bowl.  The bottom row of the second panel is two fishes in saltire (heads downwards), the chalice and host again, a Latin cross surmounted by a monogram of the Greek letters alpha and omega, and a pomegranate.

As you can easily see, these are all religious symbols, many with Biblical referents.  Are they "real" heraldry?  I do not believe so, but they are certainly appropriate architectural elements appended to a chapel.