In the two and a half days we spent in Charlotte, Michigan, a lot of our time was at the local library, looking through bound copies of old newspapers (1960-1963).  And in keeping with my often-stated belief that "you can find heraldry everywhere," sure enough, we ran across the following on a license plate of a vehicle parked in the library's parking lot. 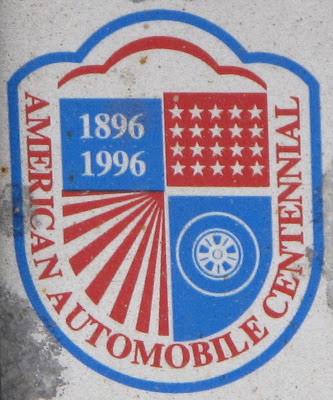 It's not "real" heraldry, as I see it, but it's certainly an attempt at an heraldic-like logo.  And it celebrates American automobiles, which some of us (especially those who, like me, were brought up during what I think of as the golden age of American muscle cars) think is kind of cool.  (The fact that this particular plate was mounted on a minivan took away a bit from that coolness.)

Still and all, though, it's a try for something heraldic.  And while it may have fallen a bit short, I think the attempt was made ought to be given some consideration here.

Email ThisBlogThis!Share to TwitterShare to FacebookShare to Pinterest
Labels: Michigan