Heraldry, Even in a Small Town


So after the conference in Fort Wayne, Indiana, finished up, we drove to the small town in southern Michigan of Charlotte, almost exactly 50 years after my family had moved away from there.  And while I have often said that "you can find heraldry everywhere," I was not certain that I'd be able to do so there.  Happily for my theorem, there was heraldry to be found in this town of some 9,000 people, both real and not. 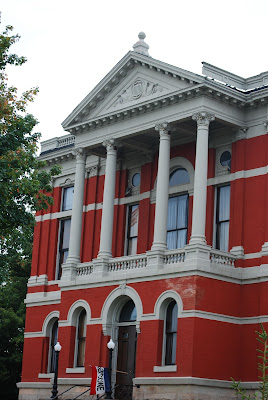 The real heraldry was found, not so surprisingly, at what used to be the county courthouse, a large red brick building now occupied by the Charlotte Historical Society and a museum. 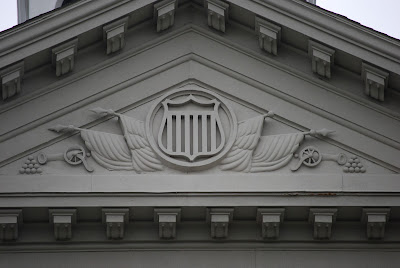 The first coat of arms was to be found in the pediments over the doors to the building.  These are, of course, the arms of the United States of America, Paly of thirteen argent and gules, a chief azure.  And this is the correct version of those arms: thirteen stripes (the number often varies from that), and no stars on the chief (as is often found, the artists confusing the flag with has stars with the arms, which does not). 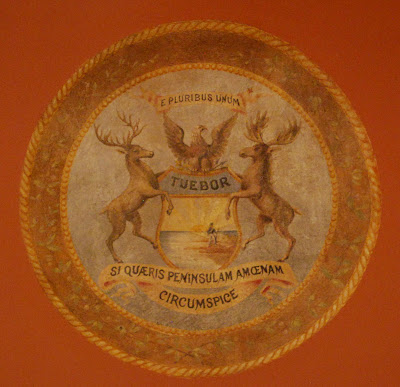 Inside, in what used to be the courtroom was the "arms" of the State of Michigan.  It is, as you can easily see, "landscape" heraldry, with not one, not two, but three mottoes.  E pluribus unum, above the eagle crest, used to be (until the 1950s) the motto of the United States, "out of many, one."  The second, on the chief of the shield, Tuebor ("I will defend").  And finally, Si quaeris peninsulam amoenam circumspice (If you seek a pleasant peninsula, look about you).  This last totally ignores that fact that the State of Michigan consists of two large peninsulas, along with a couple of smaller ones (the "thumb" of the hand of the lower peninsula and the "tail" of the dog of the upper peninsula), and the argument could be made that there are even more (the "little finger" of the hand, for one).

Still, it's official "heraldry," however much it may be a landscape placed on a shield, and there it was, painted on the wall of the court on the upper floor of the county courthouse.

Email ThisBlogThis!Share to TwitterShare to FacebookShare to Pinterest
Labels: Michigan