And Speaking of Made Up Arms


In my last post I discussed the humorous "arms" made for the Senate Park Commission back in 1902. And it must be admitted that the history of attributing arms to historical persons is a long, if not necessarily venerable, one.  For example, the Boke of St. Albans, the first heraldic treatise published in English back in 1486 tells us that Japheth, the son of Noah, "made first the target [shield] and therein he made a ball in token of all the world."  Other authors tell us that Adam and Eve each had a coat of arms: Adam, Argent plain, or white, and Eve, Gules plain, or red.  Still others portray the arms of the three Magi who visited the infant Jesus, and others still, the heraldic emblems of Jesus and even God Himself.

And so it is that, having run across this achievement of arms a little while back, I offer it to you here as being in keeping with that long tradition of attributed arms, in this particular case, from "a long time ago in a galaxy far, far away." 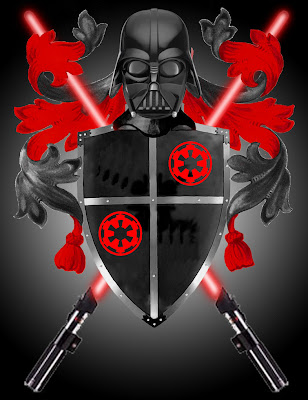 They are, of course, the arms of Darth Vader, Lord of the Sith, with the appropriate "barred helm affronty" indicative of his rank.

Whatever the intentions of the artist, Skeeter Skye, I see the arms as quartered, with the arms of the Empire (Sable plain, or black) as an augmentation in the same way as the arms of France were quartered with the plain Gules of Charles d'Albret (d. 25 October 1415), Constable of France 1402-1411 and 1413-1415, shown here from his page on Wikipedia. 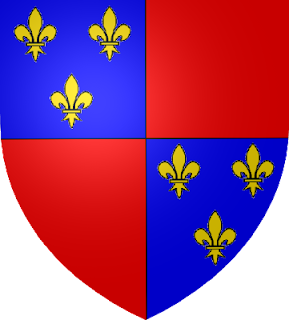 Do I take attributed arms like those of Darth Vader above seriously?  No, not really, no more than I do the arms attributed to people who lived centuries before heraldry came into being.  But I do think it's fun to see what ideas people come up with for arms they think might be appropriate to the characters, don't you?