Or, at least, an American President's heraldry.

At last fall's International Congress of Genealogical and Heraldic Sciences, Danish heraldic artist Ronny Andersen kindly gave me a copy of the catalog (which he also helped to put together) for an exhibit of heraldry in Denmark, "Knights: in the book and on the shield."  (Well, the title really is "Riddere: i bog og på skjold," but that's what it translates to in English.)  The description of the exhibit on the front cover notes:


Exhibition of models of coats of arms from the orders' chapter archive
Her Majesty the Queen's Small Library, Christian VIII's Palace at Amalienborg
May 25, 2012 - January 1, 2014

(Well, that's how Bing translates it, with an assist from me, who knows that in this context, "wappen" is "coats of arms" and not "weapons," for example.)

So if any of you should have the opportunity to go to Amalienborg this year, be sure to try to attend this exhibit, which includes arms from members of both the Order of the Elephant and the Order of the Dannebrog.  Just from the catalog it looks to be well worth the time.  But I digress.

On page 14 of the catalog is a portion of an article (in English) about the arms of President Dwight D. Eisenhower and the meaning of the (many!) symbols upon it. 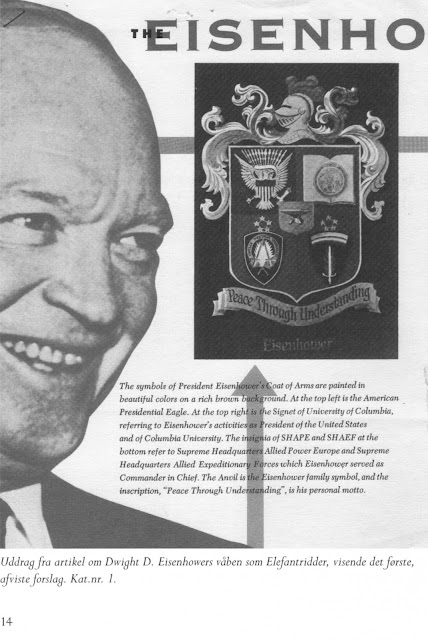 For those of you who are interested, there is some additional background on this, an earlier attempt, and the final coat of arms for Ike following his induction into the Order of the Elephant following WWII, on the website of the American Heraldry Society at Dwight David Eisenhower, 34th President of the United States

As you can read there, the above proposal for his arms was not accepted for a couple of politely-stated reasons, but basically because it was just too bloody complex.  Eventually this much simpler, far more identifiable design was proposed and accepted.  (And aren't we all glad for that?) 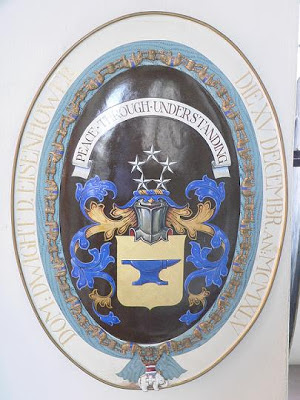 In another post on this blog nearly three years ago I noted a semi-heraldic doodle made by Eisenhower during his Presidency (created during what must not have been a very exciting meeting).  That post can be found at http://blog.appletonstudios.com/2009/02/homemade-american-heraldry-or-hah-i.html