The Arms of Heidelberg

So, to get back on track from our trip last fall, as I mentioned we took a few days and spent them in Heidelberg, Germany. We were there mostly to visit places (streets, possible houses, and churches) related to some of my ancestors who lived there in the 1700s and 1800s.  (My great-grandfather emigrated from Heidelberg in 1881 at the ripe old age of 14.  He was, alas, the last of his surname living there, having no siblings, and his parents and grandparents having pre-deceased him.)

Naturally enough, especially in what is effectively a tourist destination like Heidelberg, which has been attracting visitors for a long time now, we ran across a number of depictions of the city's coat of arms, Sable, a lion rampant Or armed, langued, and crowned Gules, atop a trimount Vert (some depictions show the lion double-queued, or double-tailed, and some show it queue-forchy, or split-tailed, while the majority give it a single tail), done in various media and in several artistic styles, from pretty classical to very modern.

It's a great coat of arms in that it is simple, easy to identify, and can be done in a wide variety of ways. 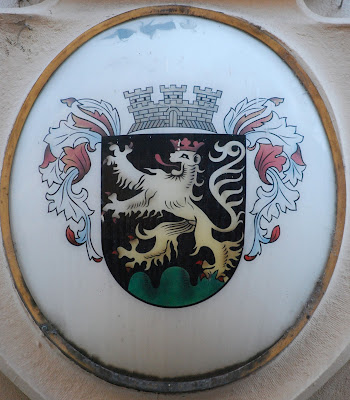 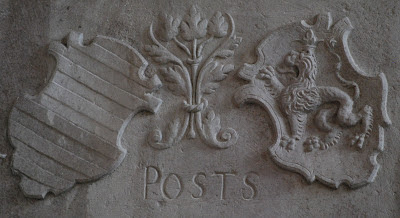 This one, with the arms of Heideldberg on the right, is from a memorial inside the Peterskirche. 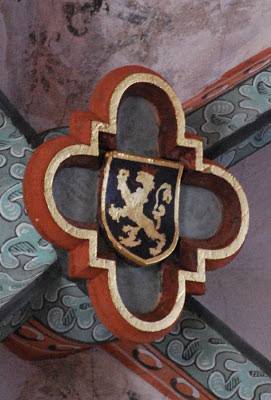 The one above is from a roof boss in the Heiliggeistkirche; the one below from one of its interior pillars. 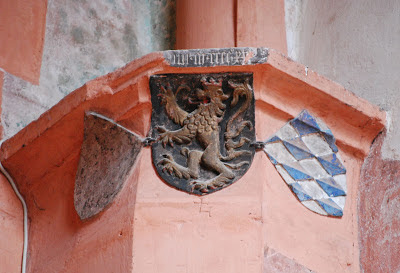 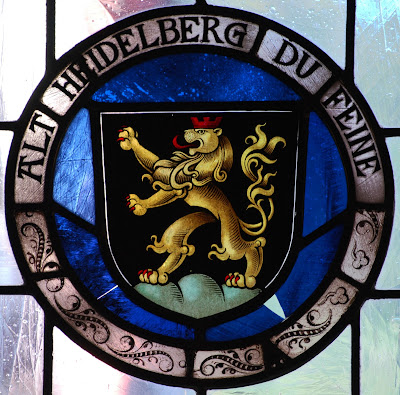 A stained glass window in the Zum Ritter Hotel. 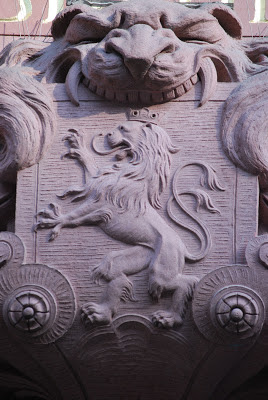 On the exterior of the University Library. 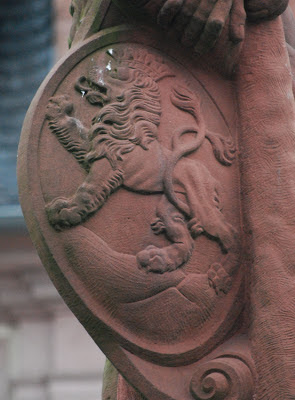 On a shield being held by the statue of Hercules in the Marktplatz. 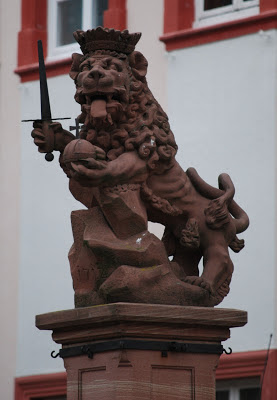 The city's coat of arms "in the round" as it were (with the additions of a sword and orb, which makes for an awkward "rampant" pose). 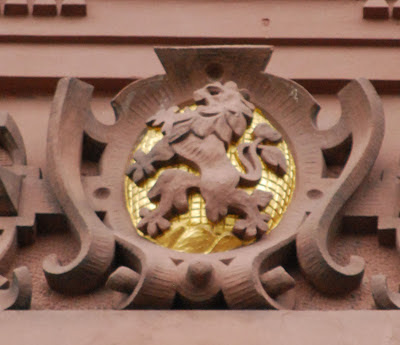 This one has the black of the shield gilded, while the golden lion is done in a terracotta color.

In a modern style on a banner ("of the livery" colors, black and gold) in the Market Square, suspended from a pole with the lion from the arms (in a matching style) as the finial atop the pole (below). 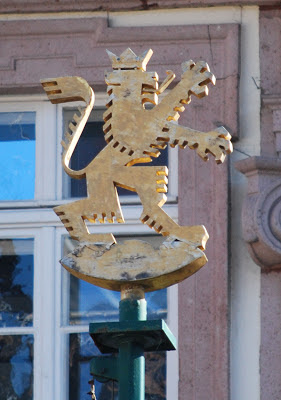 And last, but certainly not least, again in a modern style on the door handles to the building housing the tourist bureau.  (Where a couple of very nice young ladies did their best to help me read photocopied excerpts from some 1860s city directories and try to find where some of the streets listed in them are located.)

It was great for me as an heraldry enthusiast to keep running into the city's coat of arms all over the old city done in so many different media and styles.  I just love it when a place really uses its heraldry, and Heidelberg certainly does that.  (If only I'd been able to locate a tshirt in my size with the arms on it.  But I did find, and buy, not one but two different baseball caps with the arms, so I'm really not complaining at all!  One of them is my new favorite cap, moving the previous favorite, one I bought in Quebec City with the crowned badge of the Royal 22e Régiment, to second favorite.)