One of the big tourist destinations in Heidelberg is the Hotel Zum Ritter, which in addition to being a fine old building, has various displays of heraldry about it. 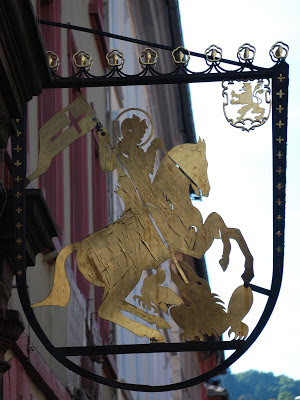 As their name suggests (Hotel at the Knight), their emblem is the knight St. George slaying the dragon, as displayed on the sign outside.  Which sign, as you can see, also has a depiction of the arms of the City of Heidelberg in the corner.

The red sandstone facade of the building has a number of carvings and bas reliefs of various subjects on it, but of course, I was drawn to the panel with the two coats of arms, above: a ram salient and two fishes haurient.

We managed to go by the Hotel about mid-morning when they were starting to set up for lunch, and asked and received permission to go inside the restaurant portion to photograph some of the stained glass panels that we could see from the street.  In addition to one panel containing the arms of Heidelberg which you will find in the post from February 14 (http://blog.appletonstudios.com/2013/02/the-arms-of-heidelberg.html), they also had these two panels of the following: 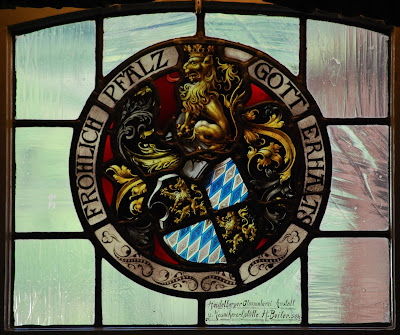 This one of the quartered arms of Pfalz and Bayern (in English, Bavaria). 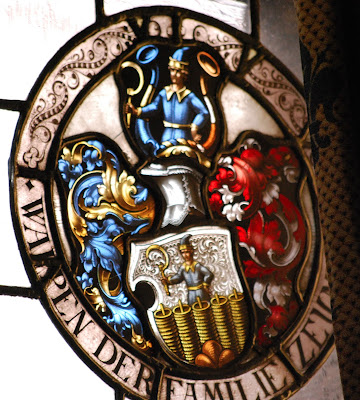 And this one of family arms, but whose name was half-covered by the curtain which I wasn't going to push my luck by moving.  We seemed to be making the staff a little nervous already by our presence.  So, sorry, I don't know (yet) whose arms this panel displays.

But what a great display of heraldry to run across that day!