It's taken me a very long time, but I've finally gotten around to framing and hanging the large (20" x 20", or about 51 cm x 51 cm) Flemish heraldic tile that I blogged about on December 13, 2010 (http://blog.appletonstudios.com/2010/12/another-heraldic-mystery.html) (yeah, it's been over two years since I bought it, so it is well overdue).  I have to admit that I have made no progress yet in determining the reference on the plaque to the years 1924 and 1949, but given how long it's taken me to get it framed, and how much stuff I've been doing in the meantime (much of which you have seen in my various posts on this blog between then and now), it's not all that surprising.  Oh, well, someday I'm going to retire and have full days that I can devote to heraldic research.

Anyway, I mentioned that this plaque was going to replace a large very naturalistic depiction of the arms of Mexico, superimposed over a relief map of the country and the whole thing bordered with the arms and names of its constituent states, and now it has.  I'm still trying to figure out where I'm going to move Mexico to; as I said in that earlier post, "So much heraldry; so few walls."  But I really like it, and am not willing to consign it to the dust bin!

So here are the "before" (with Mexico) and "after" (with the Flemish plaque) pictures of the bookcase wall of my home office.  (The apparent curvature of the ceiling is an artifact of using a wider-angle lens on the camera.  It's really straight.  No, trust me, it is!)  For those of you who are interested, clicking on either picture should open a larger, higher resolution version. 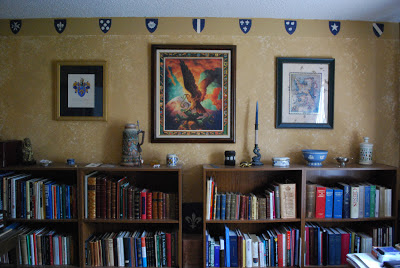 Nice!  I really love being able to work in this room!