Well, it's happened again!  I mean, I know I've said it before, and on a regular basis I run across something that proves it to me again.  "You can find heraldry everywhere!"  And it's true.

We were out Saturday visiting a favorite antiques mall just because we hadn't been there for a while.  And in wandering the aisles looking at what they had, I ran across -- wait for it -- more heraldry!

This time it was a large (20" x 20") poured concrete or ceramic plaque (either way, fairly heavy), with five coats of arms.  And a label that said "Swedish", which after a brief review of the arms and the names, not to mention the wording on the scroll beneath the central arms, I doubted.  (And, sure enough, after buying it, bringing it home, cleaning it up a little, and then doing a little bit of research on the web, it turns out to be Flemish; the towns represented are in the provinces of East Flanders and Antwerp.) 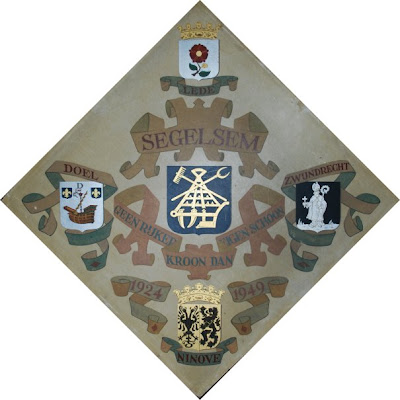 Anyway, in the center of the plaque are the arms of Segelsem (which should be Zegelsem, and whose arms have an eye in chief where the rounded upside-down triangle is on this depiction), and then around it in clockwise order beginning in chief, the towns of Lede, Zwijndrecht, Ninove, and Doel.  You can find these arms on the Heraldry of the World website, with the exception of Lede, for which no image appears.  (There is an image of the current Lede arms on Wikipedia, but the arms there - Azure three Tau crosses or - do not match the arms on the plaque.)

The scroll under the Zegelsem arms, Geen rijker kroon dan eigen schoon, which Babelfish roughly translates as "No richer crown than own clean," is a sentiment that (if I am understanding it correctly) I can certainly agree with.

The real mystery (to me) comes when we look at the two dates on the plaque: 1924 and 1949.  Clearly this plaque is memorializing something, but I have no idea what.  A fairly extensive search on the web has turned up no connections between the five towns and those dates.  Yet there must be some reason for these arms and those dates.  Someone appears to have put a lot of work into creating this plaque.  I'd love to know why.  (Ah, good, another research project to do in my "copious free time.")

In the meantime, I'm going to make a frame for it and hang it in my office where currently the large eagle on a cactus with a rattlesnake in its beak, bordered with the arms of the individual states of Mexico, currently hangs.  I'm not sure where I'll move Mexico to yet.  (So much heraldry; so few walls!)

We will now return you to our continuing posts about the heraldry we found on our European trip in September.
Posted by David B. Appleton at 6:00 AM