One bit of heraldry that I did not expect to run across in Maastricht was the following, used as a house sign; that it was the house sign for a shop called Jacks and Jeans was even less expected. 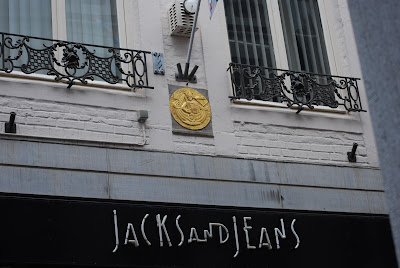 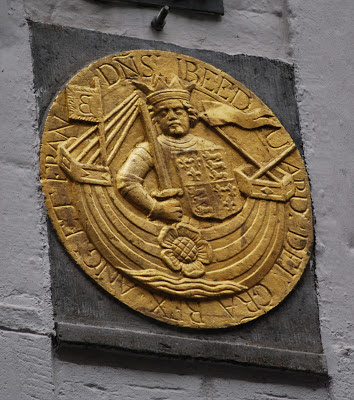 As you can see, the man in the ship is Edward, King of England, the legend around the image being the Latin (often abbreviated here) for, well, I'm not certain what the IBE stands for, but then we have "Edward by the Grace of God King of England and France" and then we have the DNS (the tilda above the N generally is scribal shorthand for another N; I don't know what that stands for, either.

Nor do I know which King Edward this is supposed to represent.  The French quarters of the Royal Arms have only three fleurs-de-lys (often called France Modern).  If this is accurate (and not just an error for the use of the earlier France Ancient, Azure semy-de-lis Or), the first Edward to use this version was Edward IV (reigned 1461-1470, 1471-1483).

If that is not the case and the earlier version of the French arms is meant (for example, the depiction of Edward III in William Bruges' Garter Book shows France Modern rather than France Ancient), then this is Edward III (reigned 1327-1377), who was the first English king who quartered France with England on his shield.

Email ThisBlogThis!Share to TwitterShare to FacebookShare to Pinterest
Labels: England, The Netherlands