I’ve been so busy lately, what with working full-time, keeping my website up-to-date (well, sort of; it really needs a good going-over), doing all of the necessary weekly chores that come with owning a home and living a life, plus going through my photos from Maastricht heraldry to share with you here, that I’ve gotten a little behind in keeping up with some of the news items that crop up that discuss heraldry and coats of arms.


In an article on November 20, 2012, by BelTA, the Belarusian Telegraph Agency, at http://news.belta.by/en/news/culture?id=699480, we learn that “The symbol of Grodno will appear in all iconic places of the regional capital, BelTA learnt from the ideology department of the Grodno City Council.”

The city of Grodno had held a contest for the best ideas to decorate the reconstructed Privokzalnaya Square. The winner was a sculpture of St. Hubert’s deer, a symbol depicted in the coat of arms of the city (a depiction of the city's arms appears below). According to the BelTA article, dozens of proposals from artists and sculptors for decorating tourist routes in the city had been submitted. In the end, though, it was decided that the image of St. Hubert’s deer will remain the primary symbol of Grodno. 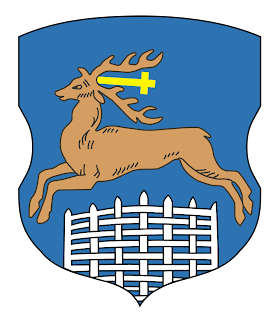 St. Hubert is called the "Apostle of the Ardennes," and was the first Bishop of Liège, Belgium. According to his legend, on one Good Friday morning, when the faithful were crowding the churches, Hubert sallied forth to the chase. As he was pursuing a magnificent stag or hart, the animal turned and he was astounded at perceiving a crucifix standing between its antlers, while he heard a voice saying: "Hubert, unless thou turnest to the Lord, and leadest an holy life, thou shalt quickly go down into hell". Hubert dismounted, prostrated himself and said, "Lord, what wouldst Thou have me do?" He received the answer, "Go and seek Lambert, and he will instruct you." He then renounced all of his honors, gave up his birthright to the Aquitaine to his younger brother Odo, and studied for the priesthood under Lambert in Maastricht. His symbol since then has been a deer or stag with a Latin cross or a crucifix between its antlers.

Isn't it great to see a city not only using, but expanding the usage of, its coat of arms?
Posted by David B. Appleton at 6:00 AM