Leaving the Basilica of St. Servaas and walking along one side of Vrijthof Square, we come to the Museum aan het Vrijthof (previously the Museum Spaans Gouvernement), a museum of local history, art and artifacts housed in the old Spanish government building.  (The Museum also has a great set of entrance doors, but non-heraldic and thus not particularly related to the topic of this blog.  Still, if you are ever in the neighborhood, you should consider visiting.) 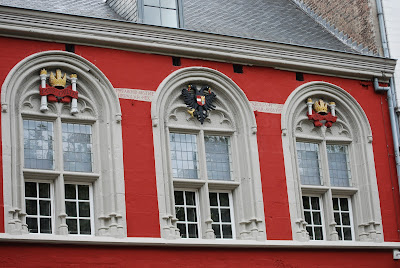 The facade of the building is dominated by a row of windows, the three on the right of which each have an arch above them which house heraldic elements. 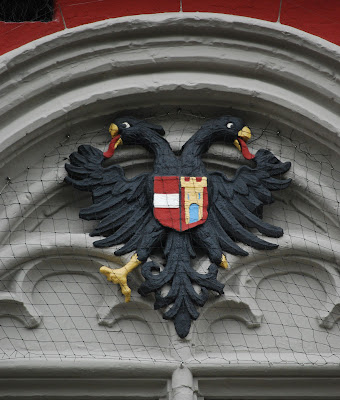 The central of the three has a rendition of the double-headed eagle, on its breast a shield marshalling the arms of Austria (the Hapsburgs were also known as the House of Austria and they used the arms of Austria extensively; the family arms were different: Or a lion rampant Gules armed, langued, and crowned Azure) and Castile.  While impressive, it does seem to be a bit crudely painted. 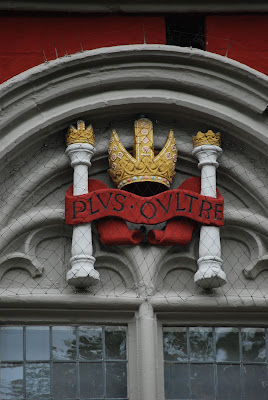 The windows on either side have the imperial crown between the crowned pillars of Hercules, a badge adopted by the Holy Roman Emperor Charles V, along with his motto, Plus Oultre (in Old French, it is often written as the Latin Plus Ultra; in either case it means "further beyond").  The pillars and motto can still be found used in the achievement of arms of Spain, where the pillars are used as supporters for the shield.  (See, e.g., http://www.ngw.nl/int/spa/spannat.htm)

(The netting in the close-ups is to keep the pigeons from roosting or nesting there; pigeons everywhere seem to have no respect at all for art.)