Okay, as promised, here are two more armorial stained glass windows in the Basilica of St. Servaas in Maastricht. 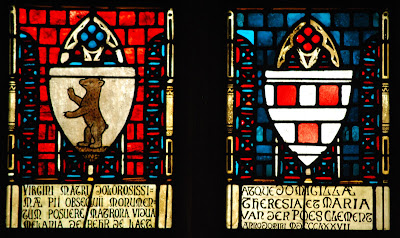 The armorial panel below them contains two coats of arms.  The left-hand panel depicts the arms of Melania de Behr de Laet.  These arms are found in Rietstap's Armorial Général as: de Behr (Maestricht, Bruxelles).  D’arg. à l’ours ramp. de sa. soutenu d’une terrasse de sin.  An English blazon would be: Argent, a bear rampant Sable atop a terrace Vert.  (Yeah, I know, both the bear and the terrace look brown in the window.)

The arms in the right-hand panel are those, if I am reading the Latin correctly (and I am no Latinist!), of Teresa and Maria van der Poes Clement.  These arms are found in Rietstap as one portion of the arms of van der Poest-Clement: D’arg. à trois bill. d’azur, in English, Argent, three billets Azure.  As with one of the coats of arms in the previous post, the window and Rietstap do not match exactly; the window makes the billets (or delfs, as the depiction here makes them square rather than rectangular) red, not blue.  The most likely explanation is that the window depicts the arms of a different branch of the family.  (Other possibilities are that there is an error in Rietstap, or that the glass artist made an error.)  The window also bears the date 1877. 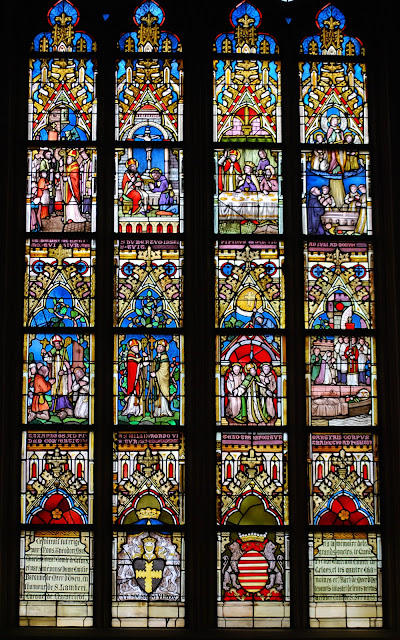 And the final window presented here has, in the upper two rows of panes, scenes from the lives (and deaths) of two saints. 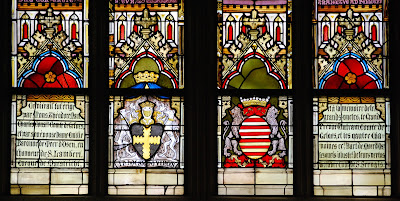 The armorial panel below them contains two coats of arms.  The left-hand armorial panel depicts the arms of the Comte de Gelors.  Rietstap has these arms as Geloes: De sable à la croix engr. d’or; Sable, a cross engrailed Or (yes, I know that the cross looks more like indented here, but indented is a lot easier to depict in stained glass than engrailed is),  and has the same motto: In hoc signo vinces (In this sign, conquer).

I am not yet certain of the arms in the right-hand armorial panel.  But it was either keep hunting for the shield in my "spare" time and delay this posting, or admit that I do not (yet!) have the time I'd like for heraldic research and get the post up as I promised myself I would do.  You can see for yourself the choice I made.