Continuing on in our heraldic tour of the Basilica of St. Servaas in Maastricht, we come to some of the magnificent stained glass windows there.  And when I say "some," I mean I'm not going to do them all, at least not now.  (Someday, when I'm retired and can sit in my home office all day and do heraldic research -- a day I am looking forward to -- then I may present and discuss all of the heraldry I can find in a specific place.  But that day is not yet, and I've only got so much time to look up the coats of arms I am sharing with you here.  So, as I say, "some.")  But for now, here are two of the windows I photographed in St. Servatius, with details and the results of what little research I've been able to do on them.  (And I'll do two more windows in the next post.)

Here we have this wonderfully colorful window, with eight saints subscribed with their names (in Latin, of course).

And here is a detail of the armorial panel at the bottom.  The two left panes contain monograms.  The third pane contains the arms of Villers, blazoned in Rietstap's Armorial Général as: De gu. à trois estoiles d’or, entre deux cotices du mème.  An English blazon would be: Gules, three mullets of six points between two bendlets Or.  As you can see, though, the window makes the charges argent, white, and not gold or yellow. 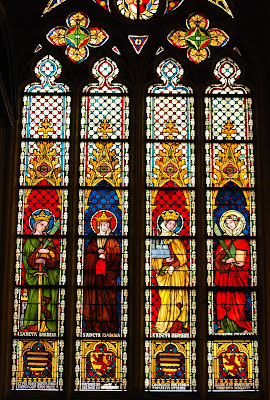 The second window for today is not as tall, and depicts four female saints.

The armorial panel at the bottom bears two coats of arms, each repeated.  I haven't had the time (see "looking forward to retirement," above) to track down the arms in the first and third panes.  An attempt at blazoning them might result in: Or, two bars wavy Azure alternating with two bars Gules.

The second and fourth panes contain the arms of South Holland: Or, a lion rampant Gules armed and langued Azure.

What beautiful examples of the glass stainers skill and armorial art!