There was a terrific display of the arms and badges of the heralds – of England, Scotland, and Canada – at the Jubilee Pageant on June 3. 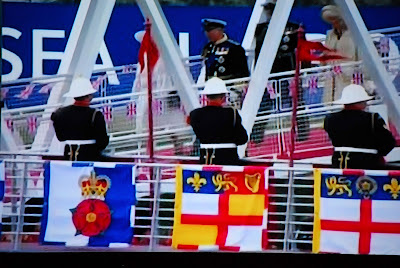 In this photograph, for example, we have banners of, from left to right, the badge of Lancaster Herald, the arms of Norroy and Ulster King of Arms, and the arms of Garter Principal King of Arms, all from the College of Arms in London. 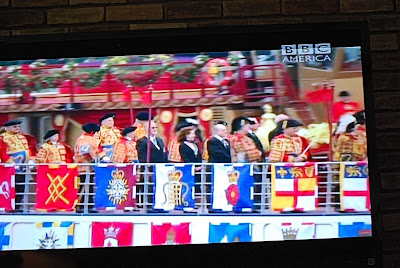 In this shot of the boat carrying the heralds preceding the Queen’s barge down the Thames (among whom are two of our Canadian friends Robert Watt (wearing sunglasses), Rideau Herald Emeritus, and Darrel Kennedy, Assiniboine Herald, and one of our Scottish friends, Elizabeth Roads, Snawdoun Herald and Lyon Clerk, standing next to Rob), we have, on the upper level (again, from left to right): the badges of Arundel Herald Extraordinary, Maltravers Herald Extraordinary, York Herald, Portcullis Pursuivant, and as in the picture above, Lancaster Herald, and the arms of Norroy and Ulster King of Arms and Garter Principal King of Arms, all of the College of Arms.

On the lower level (left to right) we have: the badge of Canada's Fraser Herald, and the arms of the Canadian Heraldic Authority (acting as the badge for the Chief Herald).  I can’t see quite enough of the emblems on the other banners to unequivocally identify them from this photo.  (Curse you, BBC!  You couldn't have panned down a little?)

The website for the Thames Diamond Jubilee Pageant (http://www.thamesdiamondjubileepageant.org/FlotillaParticipantsLogin.aspx?ReturnUrl=~%2fFlotillaParticipants.aspx) has a .pdf booklet entitled "Flags of the Pageant."  So if you are interested, you can find depictions of all of the heralds badges there.

But, wow, what a great display of heraldry!
Posted by David B. Appleton at 6:00 AM