There was a really nice article in the Edinburgh Evening News published on July 4, 2012 relating to the induction of Prince William into the Order of the Thistle at St. Giles Cathedral in Edinburgh, Scotland.  The article was especially nice in that it didn’t spend a lot of time on the obvious, but was instead mostly an interview with Elizabeth Roads, Snawdoun Herald and Clerk to the Court of the Lord Lyon King of Arms.  Here’s a 2006 photograph of Mrs. Roads about to introduce some Yank* who’s going to present at paper at the International Congress of Genealogical and Heraldic Sciences held in St. Andrews, Scotland that year. 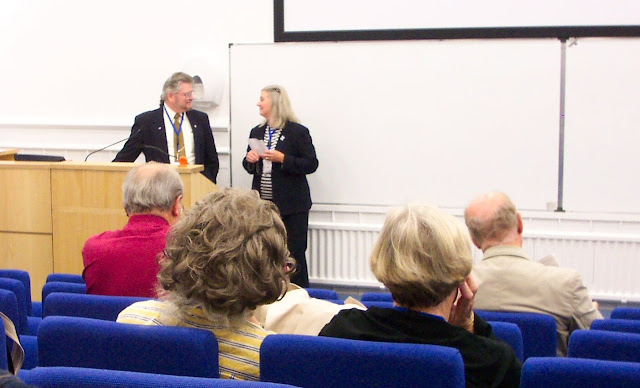 In the interview, she gives a little bit of background information of how people are seated at St. Giles Cathedral (Mrs. Roads is the one who gets to send out the invitations and determine the seating arrangements), some background into her own family history (she’s likely descended from one of the brothers of Robert the Bruce, and another of her ancestors was Sir James Balfour, Lord Lyon King of Arms in the 17th Century), and some about granting coats of arms today.

It’s a really nice article, certainly a cut well above the usual sorts of articles about heralds and heraldry where they end up calling coats of arms “crests” and so on.  The article, “Elizabeth Roads knows the path to the Order of the Thistle” can be found on-line at: http://www.scotsman.com/lifestyle/heritage/elizabeth-roads-knows-the-path-to-the-order-of-the-thistle-1-2391589

* Any resemblance between that Yank and the author of this blog is probably unavoidable.