Earlier this month, on June 3, 2012, we had the privilege of watching the Thames Jubilee Pageant for Queen Elizabeth II.  (Thank goodness for BBC America!)  As a consequence, we were able to catch at least glimpses of some of our friends and acquaintances who are heralds and were able to attend on Her Majesty “up close and personal” as it were.

Unfortunately, taking photographs from our TV screen (even though it’s a big HD one) is still an inexact science for me; I guess I’ll have to play around with it some more and see if I can’t get better at it.  So these, and upcoming photos from the Jubilee Pageant are not at all what I’d like to have here, but they’re what I’ve got, and you’ll just have to put up with the fact that I can’t take very good pictures from a television screen.  (Yet!)  It also didn’t help that (1) they didn’t show very much of the heralds in the procession at all, and (2) panned their cameras quickly enough that it was harder to get a decent shot.  (I did switch over to the “sports” mode of my digital SLR, but, well, you can see the results for yourself.  Clearly, it needs work.) 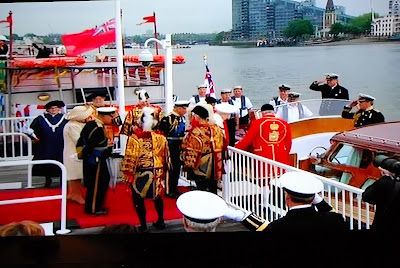 This shot is of our friend Claire Boudreau, the Chief Herald of Canada, in her new dark blue tabard, standing next to David Sellars, Lord Lyon King of Arms, with (I assume, I can’t make out his face under his bicorn hat) Garter Principal King of Arms, facing toward the camera, with Clarenceux and Norroy and Ulster Kings of Arms with their backs to the camera, while the Queen and Prince Philip walk between them. 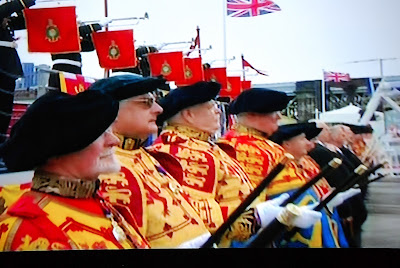 And in this shot, we have our friends Charles Burnett, Ross Herald Extraordinary, on the far left, and Mark Dennis, Ormond Pursuivant, third from left, with other heralds from the Court of the Lord Lyon (hence the tabards with Scotland in the first and fourth quarters (upper left and lower right) and England in the second quarter (upper right) on their tabards, the opposite of what their counterparts at the College of Arms in London wear.
Posted by David B. Appleton at 6:00 AM