In an article published June 26, 2012, on the ChesterFirst website (which publishes news stories from The Chester Standard and The Chester Leader) about the restoration work being done on the late-19th century Grosvenor Museum building in Chester.

It seems that while doing some of the other work on the upper exterior of the building, they discovered not only that the balustrade needed to be replaced, but the talbots holding the Grosvenor coat of arms needed to be recarved.  I have to admit, they are impressive!  (I wonder how difficult it would be to do something like this on my house?  It probably would cost more than it was worth, wouldn’t it?  Still, it’s a great dream!) 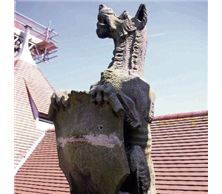 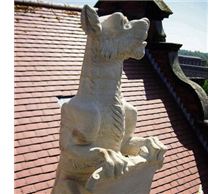 The story says that the two talbots were on the Grosvenor coat of arms, but as you can see from this blazon from Burke’s General Armory below, talbots are in the crest and are used as supporters, but do not appear on the shield itself.

The museum is named after Hugh Lupus Grosvenor, 1st Duke of Westminster, who donated part of the land and also paid some of the construction costs for the museum, hence his arms, and supporters, on the roof.

The full story can be found on-line at: http://www.chesterfirst.co.uk/news/113797/new-heraldic-dogs-on-guard-at-grosvenor-museum.aspx