A Recent Canadian Grant of Arms

In an article in The Star.com dated August 3, 2011, the Canadian Heraldic Authority has granted an achievement of arms (a coat of arms with crest, supporters, compartment (the bit the supporters - here, bears - are standing on) and a motto) to the Wong Kung Har Wun Sun Association (also known as the Wong association of Ontario). 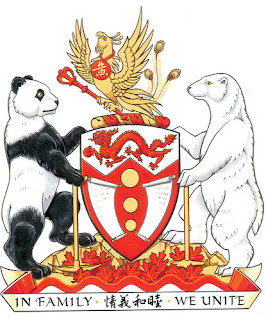 The new “crest” (the paper apparently fell into the same mistake that so many others, including, alas, The Times of London), was officially unveiled on August 13 at the Wong’s National Convention in Toronto. They were expecting about 1,100 people of that surname at the largest gathering of its kind to date. 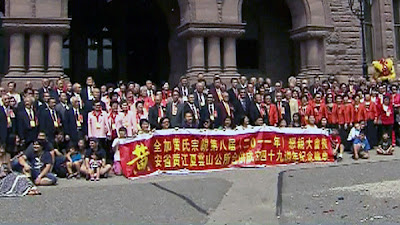 The article also mistakes the arms for the Association as arms for anyone surnamed Wong, though I expect many members to be able to use the arms to show their affiliation with the organization.
Additionally, Greg Wong, this year’s event organizer, noted that his personal idea for a motto, “Don’t Mess With The Wongs”, was overruled with “In Family We Unite.” Not as stirring as Clan Macgregor’s “My Blood is Royal,” but certainly appropriate for a family association.
The complete article, with more quotes from Greg Wong and additional background on the Wongs of Canada and their history in that nation, can be found at: http://www.thestar.com/business/article/1033725--canadian-wongs-get-their-own-crest
Another article on the arms, with a couple of bad puns, including the one in the headline “Canadian family takes up arms to write a Wong,” can be found on the website of The Vancouver Sun at http://www.vancouversun.com/Canadian+family+takes+arms+write+Wong/5219839/story.html
Posted by David B. Appleton at 6:00 AM