There’s a nice (albeit brief) article on-line about the Museum and the Museum of Heraldry Awards at the Constantine Palace in St. Petersburg, Russia. It’s a great little article; reading through it makes me want to go for a visit. There are some nice photographs of various articles with coats of arms on them, including a very nice set of dinnerware. And the article talks about some of the coins in the collection.

But what struck me was a photograph of some military medals in their collection, one of which is the Purple Heart, the U.S. military medal for those who have been wounded in the line of duty. 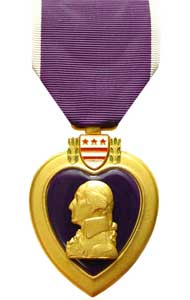 The Purple Heart medal not only has a bust (in profile) of George Washington on its obverse, it also has a depiction of his coat of arms (Argent two bars and in chief three mullets gules, which are also used as the arms and flag of Washington, DC).

Anyway, if you’d like to see it (and I do recommend it to you), the full article can be found on-line at: http://www.potolkimaker.com/second/Saint-Petersburg/museum-and-the-museum-of-heraldry-awards.html
Posted by David B. Appleton at 6:00 AM