I traveled to Virginia recently to give another presentation to the Virginia Beach Genealogy Society. They're a really nice bunch of folks, and I was tickled pink to be asked back by them. I was packing light, but had pulled the shirt I wanted to wear for the presentation out of the wardrobe, and had checked it against several of my heraldic ties to decide which one of those I wanted to take with me to wear at the presentation. So far, so good. Then I arrived in Virginia Beach and unpacked. No tie. Apparently, I had left the tie in the tie rack in the wardrobe. 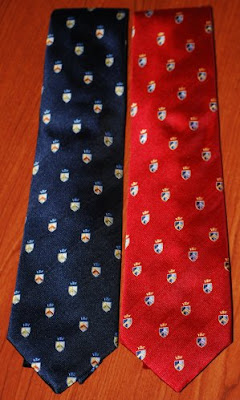 I was saved! And now, I have what I think of as my two "Virginia Beach Emergency Backup Ties." Unless, of course, I forget to pack them, too.
Posted by David B. Appleton at 6:00 AM