In a recent article in The Voice of Russia (English-language version), it was noted that this year marks the fifteenth anniversary of the adoption of the date when then-President Boris Yeltsin signed a decree establishing the insignia of presidential authority: the standard, or flag, of the President of the Russian Federation, and the presidential emblem. 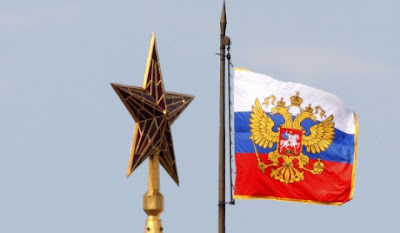 The standard is square with three equal white, blue and red horizontal stripes, gold-fringed about the edges, with a golden double-headed eagle in the center bearing St. George on horseback slaying the dragon, on a red shield. A silver cramp-iron is engraved with the president’s name and the dates of his term in office and attached to the flagpole.

Mikhail Medvedev, a member of the Heraldic Council and well-known heraldic artist, says that the composition of the standard took shape in the late 17th century, the time of Peter the Great.