Don’t Tell Me That Symbols Don’t Mean Something

A lot of us are familiar with the achievement of arms of the Russian Federation: The red shield with St. George on horseback slaying the dragon, the shield on the breast of a double-headed eagle wearing crowns (with a third crown in chief) and holding in its talons the orb and scepter. 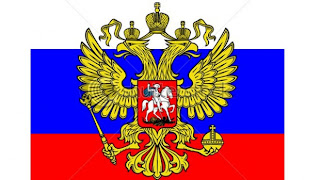 So you might be surprised to find out that someone has suggested that the achievement be modified in order to more properly include a significant minority – the 20 million (18% of the population) Muslims in Russia.

According to a story over at Fox News, Talgat Tadzhuddin, head of the Central Spiritual Association of Muslims of Russia, has said that “We are asking for one of the heads (of the Russian state emblem, a double-headed eagle) to be topped with a crescent moon and the other to be topped with a Russian Orthodox cross.”

As you might well imagine, this has caused a bit of an uproar over there. You can read the whole story at: http://www.foxnews.com/world/2011/04/30/imams-add-crescent-moon-symbol-russian-emblem-met-alarm/

I do find myself a trifle annoyed their referring to it as an “emblem” rather than a coat of arms or an achievement of arms, but at least they’re not calling it a “crest.”
Posted by David B. Appleton at 6:00 AM