I had an interesting article pointed out to me the other day.  So interesting that I've added a link to it under "Websites of Heraldic Interest" down the left column of this blog.

The article is entitled "The beginnings of heraldry in the Civil War -- Symbols Rally the Spirit" by Colonel Ralph R. Burr.  It was original published in the Army Information Digest in August 1961; that is to say, some 50 years ago, during the centennial of the American Civil War (1861-1865).  I found it fitting that I would run across it now, during the sesquicentennial of that war.

It was especially interesting to me for a personal attachment -- my third great-grandfather fought in the Civil War in the 17th Maine Infantry Regiment, whose regimental history is entitled "Red Diamond Regiment" because of the red felt diamond (lozenge) shaped patch or badge they wore.  Col. Burr's article gives some background on the origins of such patches, and how they influenced the later development of other symbols used by the military. 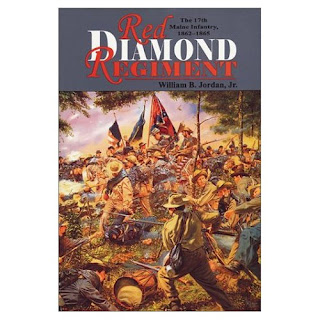 If you're interested, you can find the link to this article in the left column, as I noted above, or you can click on this link here: http://www.qmfound.com/heraldry_in_the_civil_war.htm
Posted by David B. Appleton at 5:42 PM