Alan Herbert of World Coin News has a column at Numismaster.com where he answers questions about coins that are sent to him. In the May 11, 2011 column, the very first question is about the Norwegian 1978 5 Kroner coin, which has a lion rampant holding an axe in its forepaws. 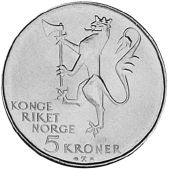 While noting that the coin is in commemoration of the 350th anniversary of the Norwegian Army, he fails to mention that the lion is that of the coat of arms of Norway.

In spite of that lapse, Mr. Herbert actually knows a bit about heraldry. In answering a question further on about coins with lions on them, he notes: “The animal is a favorite motif, especially in a coat of arms. In heraldry, the lion represents courage and strength. Several countries have lions on the majority of their coins.”  (I would insert my usual disclaimer about the attributed "meaning" of any charge in heraldry.  That is to say, "Well, maybe, but then again, maybe not so much.")

You can see the complete column of questions and answers at: http://www.numismaster.com/ta/numis/Article.jsp?ad=article&ArticleId=20355
Posted by David B. Appleton at 6:00 AM