There's a technology news article (that is to say, it really has nothing to do with heraldry) that was posted on Wednesday, April 23, over at Computerworld about how the U.S. Census Bureau is improving its methods for developing technology after problems in the 2010 Census (http://www.computerworld.com/s/article/9215762/U.S._Census_tech_makeover_includes_oasis_for_innovation).

It's an interesting brief article, but it's really only an excuse for posting the following: 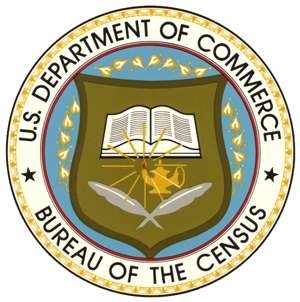 The arms of the United States Census Bureau.

While I'm glad and all that they're going to be improving their technology, it would be nice if at the same time they'd improve their "logo".  (And whose idea was that "puke pea green" field, anyway?)
Posted by David B. Appleton at 6:00 AM