There’s another place in Florence where one can see a bit of non-Italian heraldry. It’s real name is the Cimitero Protestante de Porta a' Pinti, the Protestant Cemetery, but it is more commonly known as “The English Cemetery.” It’s a place where non-Catholics, many of whom were English, could be buried when they died in the city, including its most famous resident, Elizabeth Barrett Browning. It’s kind of a cool place to visit. It sits on a raised island completely surrounded by busy streets.

Anyway, some of the monuments there have carved coats of arms on them, and I thought you might be interested in seeing a few of them. As with so much else of the heraldry in Florence, the arms here are only a sampling of what we found there. 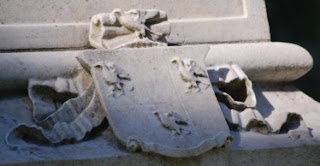 Lieut. General John Locke of Newcastle, Ireland, d. 28 February 1837.  Per fess azure and or, a pale counterchanged, three hawks with wings endorsed or.  Crest: A hawk with wings endorsed holding in the beak a padlock or.  (Per Burke's General Armory.) 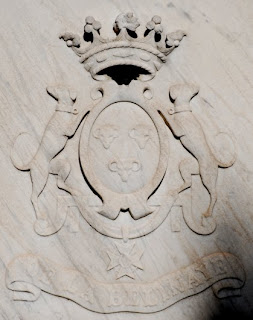 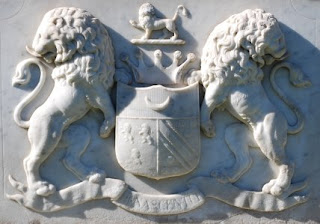 Bentink Yelverton [1792-1837] and his wife the Hon. Anna Bingham [d. 1855, eldest daughter of John Bingham, 1st Baron Clanmorris of Newbrook, County Mayo]. There is an article which outlines the life of Bentinck Walter Yelverton on-line at http://www.florin.ms/yelvertons.html  The arms here are a bit hard to parse.  Burke gives several coats of arms for Yelverton; the closest is Argent, three lions rampant gules armed and langued azure on a chief gules a crescent argent.  The arms on the sinister side of the shield are not those of Bingham, Baron Clanmoreeis, which have a charged fess between three mullets, but appear to be those of Bingham of Bingham Castle, County Mayo, Azure a bend cotised between six crosses patty argent.  (The crosses are not so easy to see in the picture here, but they are quite clear in the original high-resolution photo.)  (Identification of the Bingham arms is from O'Laughlin's The Irish Book of Arms.) 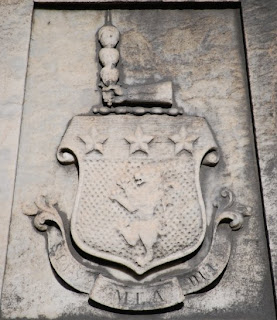 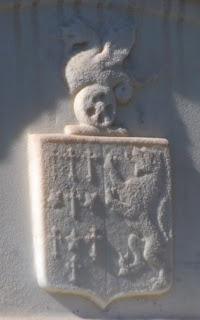 William Somerville, eldest son of the historian of Queen Anne, b. Minto, Roxburghshire [Scotland] 22 April 1771, d. Florence 25 June 1860.  These are impaled arms.  The Moore coat is Azure three mullets two and one between seven crosses crosslet fitchy three, one, two and one or.  Crest: A dragon vert spouting fire proper standing on a wheel argent.  (Burke's General Armory.)  Somerville's wife was Mary Fairfax, the Scottish mathematician and astronomer.  (She is buried in Naples.)  The closest arms to the image here for Fairfax in Burke are: Argent three bars gemelles gules surmounted by a lion rampant sable.  (Other coats for Fairfax reverse the tinctures of the bars and lion.)  The bars do not appear behind the lion here (not even in the high-resolution image), but that could simply be an error.
Posted by David B. Appleton at 6:00 AM