Upside-down and backwards. (Or should I say, in British fashion, “reversed and mirrored”, or in American fashion, “inverted and reversed”?)

Today’s post about heraldry seen in the city of Florence is a bit of a mystery. The flag here was being carried by the leader of a tourist group. If all of the main tinctures were reversed, that is, white where they are red, and red where they are white, then this would be the flag of Poland charged with the arms of Poland. But they aren’t, and so it isn’t. 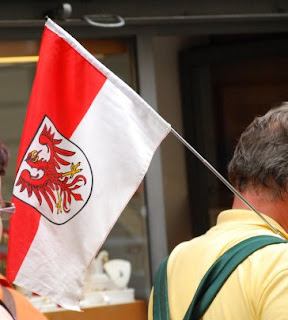 I am assuming that because the tour guides are not representatives of the government of Poland, that they are not permitted the use of the flag and arms, and so have reversed them in order to denote who they are without appearing to be “official.”
Posted by David B. Appleton at 6:00 AM