The wraps are off of the new coat of arms that has been designed by the College of Arms for Michael Middleton, the father of Kate Middleton who is about to marry Prince William next week. 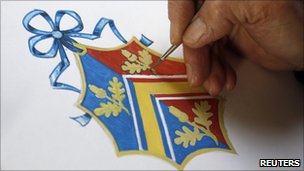 All in all, a nice and fairly simple design, as you can see from this photograph from Reuters showing Robert Parsons, one of the herald painters at the College of Arms, painting it.

I have to admit, though, I don't entirely understand the remark in the story that "Royal experts say the coat of arms ... marks the increased social status of her parents and her potential as a future Queen."  I mean, this is England we're talking about.  Any gentleman (and that covers a lot of English society these days.  Heck, if I lived there, I would qualify!  After all, I have a college degree) may receive a grant of a coat of arms.  That her family's status may have increased in English society I have no doubt, but I don't think that a coat of arms is the mark of that increase.

(But then again, what do I know?  I'm the direct descendant of one of those "damned rebels" who were out marching about the fields and roads of Massachusetts on this day in 1775, during the "Alarm of April 19" when British troops tried to seize guns, cannon and gunpowder held by militia forces in Concord.)

Updates:  There's another story, with a linked video clip, at The Telegraph, at http://www.telegraph.co.uk/news/uknews/royal-wedding/kate-middleton/8460582/Royal-wedding-coat-of-arms-created-for-Kate-Middleton.html

Additional stories from around the world on the new Middleton arms, with various pictures, etc. can be found at:

(This one has a nice photo of Thomas Woodcock, Garter Principal King of Arms, holding the painting of the Middleton arms.)

And, finally, a spoof news story, discussing an attack of toxic oak processionary moths on the new Middleton arms, containing a short statement from "Garter Principal King of Arms Thomas Woodchuck."  http://www.thespoof.com/news/spoof.cfm?headline=s1i94591#this
Posted by David B. Appleton at 9:43 AM