There are two coats of arms which the visitor will find scattered about the city of Florence. (Well, there’s actually a third that is even more commonly seen, but that will coat will get two or three posts all by itself.)

One of these two is, of course, the arms of the City of Florence, Argent a fleur-de-lys florency gules. (The term “florency” in the blazon is described in Parker’s A Glossary of Terms Used in Heraldry as: “the fleur-de-lis is drawn sometimes with a ‘fleuron,’ that is, it has buds added to the flowers; it is then described as epanoui, or florencée.” I prefer to think of “florency” as meaning “a fleur-de-lis as used by Florence”, but that’s probably just me.) The arms of Florence are found all over the city, both plain and colored as can be seen in the two examples below. 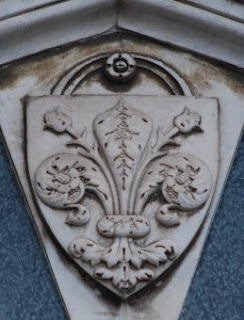 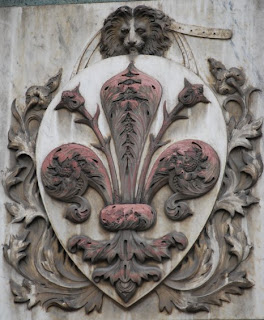 The other coat of arms encountered frequently about the city is that of the People (the popolo, from the same Latin root – populus - as the English term populace) of Florence, Argent a cross gules. 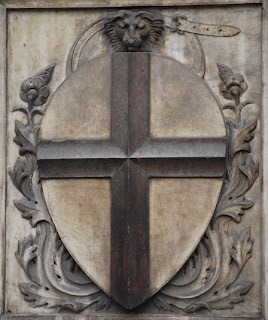 Yes, I am aware that these are also the arms of St. George, the flag for England (and incorporated as such into the Union Flag of Great Britain), Genoa, Italy (see, http://www.ngw.nl/int/ita/g/genova.htm), Milan, Italy (see, http://www.ngw.nl/int/ita/m/milano.htm), and about a dozen English families according to Papworth’s Ordinary of British Armorials, among other usages elsewhere. It’s a very “popular” coat of arms (if you’ll pardon the pun. Or even if you won’t).
Be that as it may, it is also the arms of the people of Florence, and as such can be found all about the city almost as frequently as the arms of the city itself.  And how cool is that!
Posted by David B. Appleton at 6:00 AM