I’ve often thought that heraldry could be used to make a statement. Indeed, for an example of just that, see the arms of Pope Leo XI in my post of January 10.

But sometimes the statement being made may possibly be considered to be one of more than simple family pride or something similar. 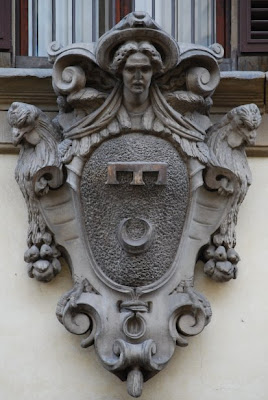 The coat of arms here is found directly across the street from the Palazzo Medici Riccardi (which itself is full of depictions of the arms of the de’ Medici family). It’s a very large, well-carved, and prominently placed coat. Indeed, you can see it quite well from the second story windows of the Medici Riccardi Palace, and frankly, I just can’t help thinking that its size and placement may have been making some kind of a statement, but not necessarily the most polite one. More like, say: “In your face, Lorenzo!”

Or maybe I’m just reading more into it than is actually there.  Still, though ....

As to the family whose arms these are, according to the Stemmario Fiorentino, there are two families to whom this coat could belong: both Canigiani and Paganelli are shown to bear: Argent, in pale a label of three points gules and a crescent azure.  The Répertoire d'héraldique italienne, vol. 1, Florence (1302-1700) by Michel Popoff (why, yes, I did go out and buy some heraldry books so I could look up and learn more about the coats of arms we saw in Florence) confirms that identification.  And Florentine Heraldry: A Supplement to the Guide Books by Howell Wills notes that Paganelli is a branch of Canigiani, hence the use of identical arms. However, the Répertoire also gives Covoni, Or in pale a label of three points gules and a crescent sable.  Although given the comparative numbers of coats identified in the Répertoire (five Canigiani versus two Paganelli versus three Covoni) might lead you to suspect that the arms are those of they Canigiani/Paganelli families, they are in fact those of Covoni, appearing as they do on the wall of the, oh, yeah, Palazzo Capponi Covoni.
Posted by David B. Appleton at 6:00 AM