Heraldry in Florence, Part One

So here we are, beginning a new year, and here I am, about to present you with some of the heraldry that can be found in that jewel of the Renaissance, Florence, Italy. We were fortunate enough to have been able to spend nearly five full days in Florence last September. It’s a beautiful city, full of art, full of people, full of tourists! And full of heraldry. No, really! There were very few places we went in central Florence where we did not see a coats of arms. (And I’m pretty sure that at least one of them was really an alley and not a street.) We walked down some streets where it was easier for one of us to walk down one side taking pictures of the heraldry on the other side, while the other one walked down that side taking pictures of the coats of arms on the first side, there was so much to see and photograph.


And our introduction to heraldry in Florence began at the entrance to our hotel.

The Hotel Paris is just around the corner and down the street about a half a block from the Piazza Santa Maria Novella. It’s a great little hotel, and I’d happily stay there again. But we stepped out of our cab from the airport, and there it was … heraldry. 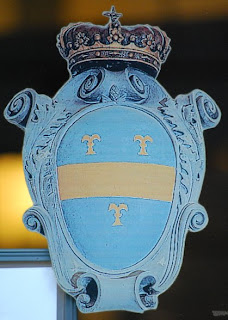 The arms used by the hotel as its logo (Azure a fess between three chess rooks or) are clearly not those of the city of Paris, but I suppose might possibly be a variation of the arms of Paris de la Brosse found in Rietstap’s Armorial Général, Azure a fess between in chief three roses and in base a tower or. Or not.
In any case, it was an auspicious beginning for a heraldry enthusiast like myself, and I looked forward to seeing more. Little did I know then just how much more I would see!
Posted by David B. Appleton at 6:00 AM