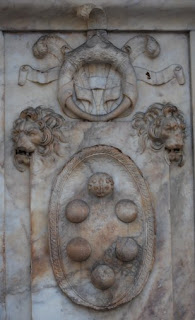 Indeed, their coat of arms appears in so many places about Florence, inside (below) and outside of buildings, I joked to my wife that, “If the Medici didn’t own it, they held the mortgage on it.” 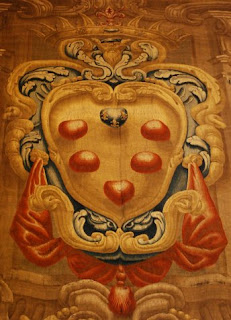 I won’t go into the history of the family - you can easily find that for yourself in any number of sources - except to note that the de’ Medici family produced three Popes, one of whom, Leo XI, has a very nice depiction of the family arms, deeply carved and painted and surrounded with the keys and tiara of the Papacy, placed prominently on the corner of one of the buildings of the city, as you can see here. 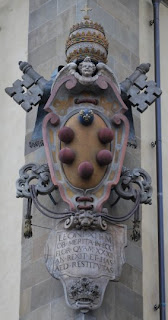 The arms most frequently appear with the augmentation granted to them by Louis XI of France in May 1465, which changed one of the roundels (or in three-dimensional representations of the arms, three balls) from red to blue and added the three golden fleurs-de-lis of France to it, although, as below from a pathway in the courtyard of the Medici Riccardi palace, you will also see the arms without the augmentation. 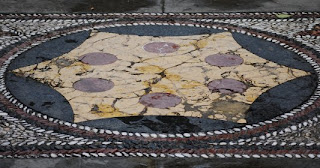 Indeed, there are places where the arms themselves are not displayed, but the augmentation, the roundel of France, will appear by itself, as here. 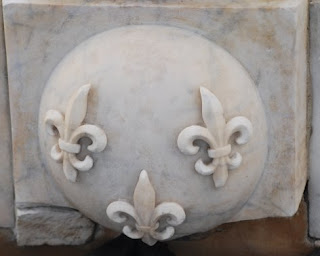 In the next post, we’ll look at some of the many variations of the arms than can be found in Florence.
Posted by David B. Appleton at 6:00 AM