In today’s post we’re going to look at a little military heraldry. We went to visit Fort Eustis, Virginia, where my father was stationed during the Korean War, and where a couple of my very earliest memories are. (I really don’t remember a lot about it, but I was what? Four?)

Anyway, Fort Eustis is the home of the U.S. Army Transportation Corps. The image below is their coat of arms on the door of the Transportation Museum there. Basically, it includes most of the ways they move stuff: a wheel, a railroad track (that horizontal line across the bottom), and wings. I guess they couldn’t work ships into it, too, though they have several in the Museum, and my dad served in the 274th Harbor Craft and Marine Maintenance Company, so you just know that they had boats, even if there’s no indication of it on their insignia. 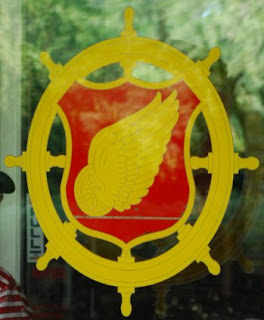 They seem to have two mottos. The most official one is “Spearhead of Transportation”, but it’s the other, less official one, that I like better: “Nothing happens until something moves.”

The other image, also from the Transportation Museum, is of a shield presented to Col. Orman E. Hicks, Commander of the 34th General Support Group, the "Hustlers”, with the coats of arms/insignia of a whole bunch of the Group's component transportation companies. Several of them specifically reference Vietnam (and a few that don’t feature the ubiquitous Huey helicopter used then), and so I assume from this that this particular item dates to the late 1960s or early 1970s. 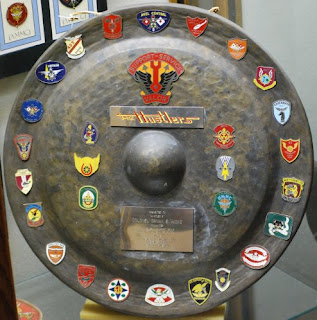 What a colorful bunch of heraldry to have run across!
Posted by David B. Appleton at 6:00 AM