More Heraldry at The Mariners’ Museum

Continuing our wandering among the exhibits at The Mariners’ Museum in Newport News, Virginia, we ran across this photographic reproduction of a 1702 etching of Howland Great Dock near Deptford, England, where ships were built, repaired, and moored. At the top center, in pride of place, was a coat of arms that could be blazoned, On a lozenge, Two bars and in chief three lions rampant, impaling A chevron ermine between three [birds] close. 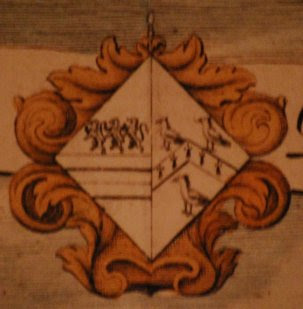 A continuing search in Papworth came up with a couple of possibilities for the arms of Mr. Howland’s wife. (Do you have any idea how many coats consisting of a chevron between three birds there are in Papworth? Admittedly, there are not many chevrons ermine (white with black tails) and even fewer chevrons ermines (black with white tails), but because Papworth is organized by the different types of birds around the chevron and then by the field tincture under each type of bird, you have read through _all_ of those pages looking for the few chevrons ermine or ermines. And apparently the birds are not, as I first thought they might be, doves, unless the engraver made an error and failed to make the chevron engrailed.)

In any case, the two likeliest possibilities I found were as follows:

I suspect that Wyke is a little more likely than Jervis; no doubt a little genealogical research would let us pin this down more strictly, but that’s a lot of work for a few moments’ curiosity.

A general search on the internet found an entry for Howland Great Dock and noted that the dock was built on land leased from and with monies provided by Elizabeth Howland. (Greenland Dock was built on the site in the 19th Century, and survives to this day.)  I suspect that, since the Dock was named after her father, while the shield (a lozenge) is hers, the arms are those of her father impaled with those of her mother.
Posted by David B. Appleton at 6:00 AM