Returning to Yorktown for one last stop, there is a small private graveyard near the Augustine Moore House, where the surrender terms between the Americans and the French on the one side and the British on the other were negotiated back in 1781. It’s a very pleasant little graveyard, contained within a white picket fence under a large tree, with a fine view of the nearby York River.

But the important part to me, of course, and the reason I’m writing about it here, is the grave of Mildred (Smith) Jameson (d. 10 December 1778), the wife of David Jameson, a prominent merchant born in Scotland who was Lieutenant Governor of Virginia in 1781 and lived nearby. (Of course, Yorktown is really a pretty small place, so everyone “lives nearby.”) 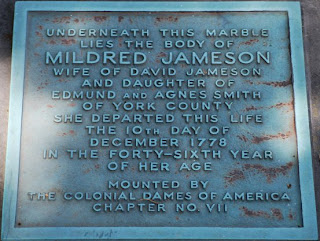 A memorial plaque was placed on her grave by the Colonial Dames of America, but of course, of greater interest to me were the carved coats of arms on the grave. 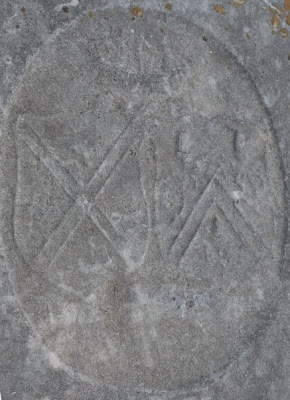 There are two shields, side by side, by now pretty badly worn (the photograph above was taken in June 2010); the charges around the saltire are very difficult to make out without recourse to a written blazon from somewhere. Fortunately for us, we have that help. Crozier’s General Armory gives the blazon of the arms as: Azure, a saltire or cantoned with four ships under sail argent (frankly, I’d go with a simpler but equally as accurate blazon of Azure, a saltire or between four ships sails set argent, but, hey, who am I to quibble? Besides, it appears that he’s just quoting from Burke’s General Armory) for Jameson, and Azure, a chevron between three acorns slipped and leaved or (for Smith). Neither Crozier nor Burke mention a crest, but from what I could make out, there is one, A ship under sail. Fairbairn’s Crests notes a crest for Jameson, Scotland, A ship in full sail, flag displayed, gules. Temple Farm – Some History of York County, William and Mary College Quarterly, Vol. 2, No. 1, also says that there is a motto – “viv - - * * * ut vivas (partially worn away).” I didn’t see any evidence of a motto, but if it was there, it would most likely have been Vive ut vivas (Live, that you may have life), though Fairbairn’s only has that motto being used by the families of Abercrombie/Abercromby, Bathgate, Falconer/Faulkner, Johnston, McKenzie, Sladen, Sluggs, and Price. Not Jameson.
Posted by David B. Appleton at 6:00 AM